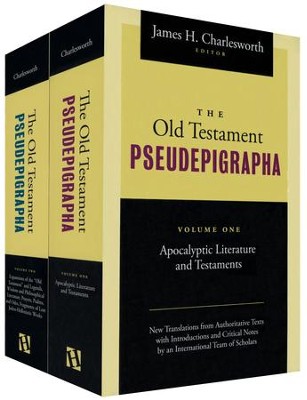 Sample Pages
Buy Item Our Price$44.99 Retail: Save 36% ($24.96)
5 out of 5 stars for The Old Testament Pseudepigrapha: Apocalyptic Literature and Testaments, Two Volume Set (10 Reviews)
In Stock
Quantity:
Stock No: WW564891
Hendrickson Publishers / 2010 / Paperback
Quantity:
Add To Cart
of These in Your Cart

▼▲
Biblical authors, like any other authors, were dependant on a vast array of literary sources from the ancient world. Many of these documents are tragically lost, but what remains provides insight into the voluminous, fascinating, complex, and dynamic literary world that shaped the expressions of faith found in the Old and New Testaments.

James H. Charlesworth's classic 2 volume compendium provides these texts in a two-volume compendium entitled The Old Testament Pseudepigrapha. Originally published by Yale University Press, the leading critical translation of these ancient texts is now available from Hendrickson Publishers in paperback--and at a fraction of its original price.Volume 1 contains "Apocalyptic Literature" and "Testaments" that reflect a wildly varying trend towards apocalyticism in ancient Judaism. Yet, despite the existence of this movement on the fringe of Judaism, the movement maintained a definitive influence, and produced amazing, if not disturbing, literary expressions.

There can be no doubt that these writings shaped the apocalyptic imagination of the biblical authors and helped to shape the way early Christians interpreted the promised return of Jesus Christ.If the contents of Volume 1 were not enigmatic enough, Volume 2 is, arguably, even more cryptic in its contents featuring expansions of the Hebrew Bible---legends and wisdom literature, prayers and psalms, and fragments of lost works.

While these works are not so imaginative as Volume 1 they do much to aid our understanding how the religious life of Judaism was lived and practiced in the ancient world, after the Old Testament closed, and Christianity began to emerge. As a unit, these two volumes, like no other collection of texts available, illuminates the literary, social, religious, and theological context in which the Bible was shaped. They are an indispensable tool providing great insight into how religion functioned and how it was expressed in both official and unofficial circles.

Key second-temple texts with introductions and notes by an international team of scholars--now available in affordable softcover bindings.

The writers of the Bible lived in a world filled with many writings. Some of these documents are lost forever, but many have been preserved. Part of these extant sources are the Pseudepigrapha. This collection of Jewish and Christian writings shed light on early Judaism and Christianity and their doctrines.

This landmark set includes all 65 Pseudepigraphical documents from the intertestamental period that reveal the ongoing development of Judaism and the roots from which the Christian religion took its beliefs. A scholarly authority on each text contributes a translation, introduction, and critical notes for each text. Volume 2 includes expansions of the "Old Testament": legends, wisdom, and philosophical literature; prayers, psalms, and odes; and fragments of lost Judeo-Hellenistic Works.

Of enormous value to scholars and students, religious professionals and interested laypeople.

▼▲
I'm the author/artist and I want to review The Old Testament Pseudepigrapha: Apocalyptic Literature and Testaments, Two Volume Set.
Back
Back