Skip to main content
CYBER WEEK HOURS LEFT! Spot great deals up to 88% off. >
The Old Testament: A Historical, Theological, and Critical Introduction
By: Richard S. Hess
Stock No: WW037146 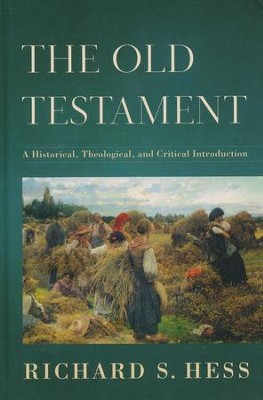 The Old Testament: A Historical, Theological, and Critical Introduction

In The Old Testament: A Historical, Theological, and Critical Introduction, respected Old Testament and ancient Near East scholar Dr. Richard Hess offers a comprehensive introduction to the Old Testament that is accessibly written and informed by the latest biblical scholarship. Hess hits all of the bases with equanimity and poise, forwarding outlines and summaries of Old Testament content and overarching theological themes, as well as an introduction to the study of the academic discipline and assistance with regard to complex critical and interpretive issues—against its ancient Near Eastern context, by New Testament writers, before the modern period, by higher criticism, in literary perspective, and more.

Twenty maps, ninety photos, sidebars, and recommendations for further study add to the book's usefulness for students. Resources for professors are available through Baker Academic's Textbook eSources. Designed to meet the needs of the broad variety of students who come to study the Old Testament at a seminary or graduate level, Hess's groundbreaking text assumes no prior knowledge of the Scriptures while still proving an invaluable resource for any serious reader.

▼▲
Richard S. Hess (PhD, Hebrew Union College) is distinguished professor of Old Testament at Denver Seminary in Littleton, Colorado, and editor of the Denver Journal. He is the author or editor of more than forty books, including Ancient Israel's History, Israelite Religions, and Song of Songs in the Baker Commentary on the Old Testament Wisdom and Psalms.

"A groundbreaking historical, theological, and critical introduction to the Old Testament that goes far beyond other introductions in terms of breadth, depth, and scope. Hess's engagement with the history of interpretation, his sensitivity to the theological and literary aspects of texts, and his willingness to engage gender, globalization, and postmodern ideologies, make this a must-have for scholars and students. I look forward to using this outstanding book in the classroom."

"In this new volume, Hess has produced a truly outstanding introduction to the Old Testament. It provides a thoroughgoing, scholarly presentation of all the books of the Hebrew Bible yet at the same time is accessible for students with its well-structured, articulate text. Moreover, the excellent selection and placement of illustrative materials provides a wonderful undergirding that rightly serves the reader in the learning experience."

"In this book Hess offers readers a current, critical, and hermeneutically instructive introduction to the Old Testament. Targeted at the graduate student, this book maps out the content of each book of the Old Testament via its canonical shape, theological import, and the critical scholarship brought to bear throughout the centuries. Particularly noteworthy are Hess's masterful introduction of the discipline of text criticism, his inclusion of premodern criticism, and his investment in issues of gender, globalization, and postmodern epistemology. This weighty volume provides student and professor alike a treasure trove of data regarding what the Old Testament is, what it contains, and why its study is essential to the Christian community."

"Among the plethora of introductions presently flooding the market, this new volume from Richard Hess distinguishes itself by its scope; its format; its attention to the full range of comparative, critical, and confessional issues; and its author's widely recognized expertise in all corners of the ancient Near East. For each book of the Old Testament, Hess treats matters of content (name, text, and outline, along with a summary overview), how the book has been interpreted (in the premodern period, according to 'higher' critical scholarship, in literary perspective, according to gender and ideological criticism, in the book's ancient Near Eastern context, and within the Christian canon, particularly the New Testament); and ends with coverage of the composition's theological themes. The coverage is extensive, but the writing remains accessible. This introduction will serve many for a long time to come as a standard go-to text."

"Hess has provided a comprehensive introduction to the study of the Old Testament that covers a wide range of scholarship, including his own careful analysis of every Old Testament book. He writes on the subject with remarkable erudition and clarity, making the work accessible and comprehensible to a broad audience. This book is an invaluable resource for any serious student of the Bible. I highly recommend it."

▼▲
I'm the author/artist and I want to review The Old Testament: A Historical, Theological, and Critical Introduction.
Back
Back