The Greco-Roman World of the New Testament Era: Exploring the Background of Early Christianity - eBook
By: James S. Jeffers 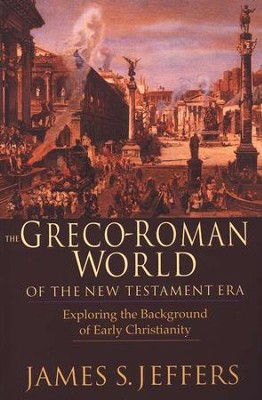 The Greco-Roman World of the New Testament Era: Exploring the Background of Early Christianity - eBook

▼▲
In The Greco-Roman World of the New Testament Era James Jeffers provides an informative and scenic tour of daily life during the time of Jesus and the apostles. He treats class and status, family and community, work and leisure, religion and organization, city and country, law and government, death and taxes, and epochal events of Roman history all while offering a "you-are-there" glimpses.

▼▲
What was life like for first-century Christians? Imagine a modest-sized Roman home of a well-to-do Christian household wedged into a thickly settled quarter of Corinth. In the lingering light of a summer evening, men, women and children, merchants, working poor and slaves, a mix of races and backgrounds have assembled in the dimly lit main room are are spilling into the central courtyard. This odd assortment of gathered believers—some thirty in number—are attentive as the newly arrived and travel-weary emissary from Paul reads from the papyrus scroll he has brought from their apostolic mentor. But if you were to be transported to this scene you would perhaps be overwhelmed by a flood of unexpected difference. The voice of the reader recedes as through open windows the din and clamor of the city assault your ears. Hooves clunk and cart wheels grind and echo from the street while drivers shout, vendors call and neighbors gather and converse. And later, as you accompany a family through darkened and dangerous streets to their third-story tenement apartment, you might try to mask your shock at the cramped and unsafe conditions. In The Greco-Roman World of the New Testament Era James Jeffers provides an informative and scenic tour of daily life during the time of Jesus and the apostles. He affords "you-are-there" glimpses of everything from legal codes to dinner foods, from social hierarchy to apartment living, from education to family dynamics. His eye-opening book will advance your understanding of the New Testament and early Christianity and enrich your reading and application of the Bible.

▼▲
Jeffers is associate professor in the Torrey Honors Institute at Biola University, and he teaches ancient history at California State University in Dominguez Hills. He has also written (Fortress).

▼▲
I'm the author/artist and I want to review The Greco-Roman World of the New Testament Era: Exploring the Background of Early Christianity - eBook.
Back
×
Back
×