Skip to main content
SPRING CYBER EVENT STARTS NOW: And it's a really BIG deal! Up to 88% off through 5/24>
Tending the Warrior Soul
By: Louis Harrison
Stock No: WW392517 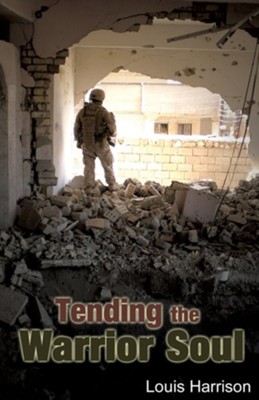 Tell us a little about yourself.  God granted me the gift of a mom who loved the Savior. The Spirit of God shepherded me to personal faith in the Lord Jesus Christ out of the context of the city of my birth that was dedicated to a powerful false religion. He redeemed me over the objections of my unsaved father- who, by the grace of God, believed just before his death. I truly understood and responded to the gospel just before I entered the U.S. Navy. As a Navy Hospital Corpsman I was sent to a small naval station in the Philippines and there God began the transformation of my life through the open home ministry of missionaries of, then Overseas Christian Servicemen's Centers, now Cadence International. Through this ministry God led me on to Bible college, where I met my wife, Linda, whom He had been carefully preparing and nurturing for missionary service. We became members of the Mission God had used in my own life, and this began a journey of forty eight years of serving the members of our armed forces in five countries through evangelism, hospitality, and retreats. Our service began in Vietnam during the Tet Offensive of 1968, and continued through years of peace time ministry and continuing education with an emphasis on counseling.
Because the country has again been drawn into conflict, the past thirteen years of our service have been focused on outreach and care for our nation's warrior guardians- Soldiers and Marines- as they are repeatedly deployed into combat and continuously build up a devastating reservoir of not only physical and psychological harm, but also of hidden and, mostly uncared-for, soul-damage.

What was your motivation behind this project?  Learning to love young warriors as they prepare for combat, and then receiving them back irrevocably changed and damaged by war, also profoundly changes the soul of the shepherd of souls. One longs to understand the warrior more deeply in order to minister to him or her more truly and meaningfully. My prayers; my determination to learn and understand; my study of God's Word; my research into the hearts of the warriors themselves through their own writings; all became more intense...and I began to record in writing what I was learning lest I miss or lose the heart of it. As I wrote I submitted my thoughts to the warriors themselves, and to military Chaplains, their caregivers in the battle space. Eventually, surprisingly, it was a dear Chaplain friend- very senior in the Army Chaplain Corps, and previously experienced as a warrior- who pressed me to somehow turn the writings into a book. At first I simply laughed. I'm not a "book writer." But he pushed, and Xulon Press apparently didn't laugh when I submitted the initial manuscript. God alone knows whether He can use the book to any extent with our warriors, their families, and their caregivers, but I've received encouraging feedback from respected military friends.

What do you hope folks will gain from this project?  Understanding and love of the warrior soul, leading to hope, healing, and restoration- all of which begins with a foundational relationship with God, the only true Judge, through His Son the Lord Jesus Christ.

How were you personally impacted by working on this project?  Every soul is precious to God. But writing about the overpowering, inexpressible damage to his soul that the warrior experiences because we sent him into harm's way on our behalf, leaves me feeling a unique sense of responsibility...a sense of responsibility that I wish I could somehow inscribe on the heart of every believer who ever meets one of our warriors.

Who are your influences, sources of inspiration or favorite authors / artists?  All the guardians of our country's security that I've personally served, the Chaplains and Christian military leaders who have inspired and blessed me, and even the secular writers who have risked embedding with combat troops in order to get their story out.

Anything else you'd like readers / listeners to know:  Prayerfully and creatively find ways to express to our guardians how highly valued they are.