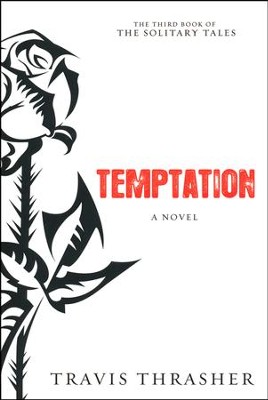 ▼▲
As a reluctant student at Harrington High's summer school, Chris meets a fun-loving senior girl who offers a welcome diversion from Chris's past. Soon Chris no longer searches for the truth about the town of Solitary. He no longer tries to pierce its shadows. He no longer questions his role in its mysteries. He makes a new choice: he runs. What he doesn't realize is that he's running the wrong way-and is very close to being beyond any choices at all.

▼▲
The third book in the Solitary Tales series for young adults, Temptation follows the soul-wrenching twists of Chris Buckley’s journey as he heads deeper into a darkness that threatens all he loves best.
As a reluctant student at Harrington High’s summer school, Chris meets a fun-loving senior girl who offers a welcome diversion from Chris’s past. Soon Chris no longer searches for the truth about the town of Solitary. He no longer tries to pierce its shadows. He no longer questions his role in its mysteries. He makes a new choice: he runs. What he doesn’t realize is that he’s running the wrong way—and is very close to being beyond any choices at all.

▼▲
Travis Thrasher is the author of more than a dozen works of fiction, including Solitary, Gravestone, Isolation and Ghostwriter. His writing is known for its honesty, depth, and surprising twists. Thrasher lives with his wife and daughters in Chicago.

▼▲
Temptation, the third book of Travis Thrasher's Christian suspense series, The Solitary Tales, portrays the consequences of Chris Buckley's decision to stop fighting the darkness of Solitary and live like a normal teenager. Like most of his plans, it backfires drastically when Chris discovers his heritage and the importance of his future role in the cult led by Pastor Jeremiah Marsh and Mr. Staunch, who owns the majority of their town. Chris' anger over the murder of his girlfriend Jocelyn by that same cult has since simmered into indifference, but he is soon shocked into fear which leads to rebellion when all he loves is threatened.

Thrasher's short chapters and frank narrative are enhanced by his allusions to music and movies and by Chris' witty sarcasm that makes the reader laugh. Thrasher sometimes portrays Chris as the clueless teenage guy- especially when it comes to girls- but by writing about Chris's tremulous relationship with his parents, the whirlwind romance he's had with the new senior girl on campus who is not as she appears to be, the new role he is supposed to play in the cultish community now that he's stopped fighting it, and a new ability that scares him out of his wits, Thrasher makes Chris and the people he interacts with seem very real. In the very last chapter, hope prevails when Chris's fear, anger, and heartache are about to overrun him and he turns away from the evil and temptation of Solitary's cult, instead asking Jesus to replace his hurt with hope.

Chris is far from perfect. He makes rash decisions, he hurts the ones he loves, he's sarcastic and pessimistic, and he is almost obnoxiously selfish at times. He's a teenager. Thrasher presents Chris not as flawless, but as believable and relatable to the readers; an impressive feat when readers discover Chris also sees visions of the undead and lives in a town filled with secrets and villainous intentions. Kelsey, the girl-next-door who is falling for Chris, is a realistic teenage girl. She is hurt by Chris's relationship with Lily, but also works to catch his attention and get her happily-ever-after in a town that is anything but a fairyland. Lily and Chris's other friends from school seem like typical teenagers, but they too have their secrets, making their relationships have a dark twist, which, in Solitary, is dangerous.

Temptation may be a long book, yet it still ends too soon. The hope of the last chapter leaves the reader wanting more, only to find that the fourth installment of The Solitary Tales will not be released until January 2013. The creepy suspense of this series has had undertones of the hope only Jesus can bring since its beginning, but now that Chris is finally choosing to believe, the story gains another layer in this multifaceted journey to Christianity in a world, in a town, that is obsessed with darkness and ungodliness. Teens, young adults, and adults will enjoy Thrasher's latest addition to The Solitary Tales. I recommend all of the books of The Solitary Tales to anyone who is not afraid of what lurks in the dark, though such things should scare us because the battle between light and darkness, good and evil, hope and hurt is very real, as Chris discovers. - Gina Graham, www.ChristianBookPreviews.com

▼▲
I'm the author/artist and I want to review Temptation, Solitary Tales Series #3.
Back
×
Back
×