Skip to main content
CYBER WEEK ENDS SOON! Spot great deals up to 88% off. >
What Your Son Isn't Telling You: Unlocking the Secret World of Teen Boys - eBook
By: Michael Ross, Susie Shellenberger
Stock No: WW4353EB 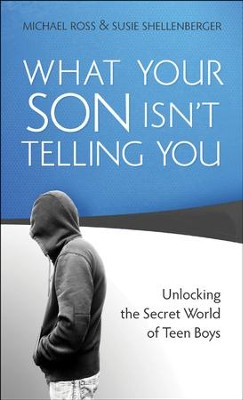 What Your Son Isn't Telling You: Unlocking the Secret World of Teen Boys - eBook

▼▲
What Your Son Isn't Telling You provides parents with a rare look into the secret lives of their teenage sons. Your son's world is full of peer pressure, the need to be a tough guy and a fear of expressing his true feelings. Each chapter of this must-read book is packed with real-life stories and emails from teen boys that will give you a new understanding of what your sons aren't telling you. Paperback.

▼▲
What Your Son Isn't Telling You provides a rare look at the secret lives of teen boys--a world characterized by loneliness and peer fear; one in which measuring up as a man means conforming to a code of always being a tough guy, never showing weakness, and never expressing true feelings. Too many boys feel the constant pressure to prove themselves in classrooms, on playing fields, and especially among their friends. Deep inside they hunger for family support and connection--and long to be accepted by their peers. Each chapter of this must-read book is packed with real-life stories and emails from teen boys that will give parents a new understanding of what their sons aren't telling them.

▼▲
Michael Ross is a veteran youth communicator and former editor of Breakaway, a national magazine for teen guys published by Focus on the Family. His online advice column--"HEY MIKE!"--was read by thousands worldwide each month. Michael is also the author of more than 18 books for young people, including the Gold Medallion winner BOOM: A Guy's Guide to Growing Up and a bestselling devotional, Faith That Breathes. He and his wife, Tiffany, live in Colorado Springs with their young son, Christopher, and two cats.

Susie Shellenberger founded Focus on the Family's Brio magazine for teen girls and served as editor for more than two decades. A former youth pastor and a high school teacher, she has written more than 40 books (including What Your Daughter Isn't Telling You) and is in demand as an international speaker for women's groups and teens. She also started the Brio Mother/Daughter Cruise for Focus on the Family. She has been featured on numerous media outlets including It's a New Day, HomeWord with Jim Burns and Moody's Midday Connection. She recently launched Susie, a magazine for teen girls. She lives in Colorado Springs and, in her spare time, enjoys walking her 150-pound St. Bernard and sometimes eating cereal for dinner.

▼▲
I'm the author/artist and I want to review What Your Son Isn't Telling You: Unlocking the Secret World of Teen Boys - eBook.
Back
Back