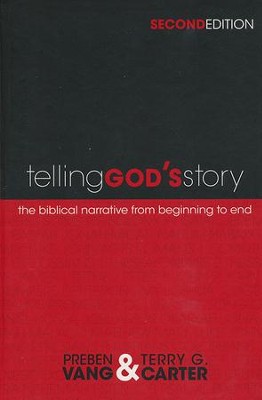 ▼▲
How well do you know His story?

By the time a Christian reaches young adulthood, he is likely to be quite familiar with every major story in the Bible, but not from having studied them in any particular order.

Ask an average Bible student to arrange certain characters and events chronologically, and the results are telling.

Telling God's Story: The Biblical Narrative from Beginning to End looks closely at the Bible from its beginning in Genesis to its conclusion in Revelation. By approaching Scripture as one purposefully flowing narrative, emphasizing the inter-connectedness of the text, veteran college professors Preben Vang and Terry G. Carter reinforce the Bible's greatest teachings and help readers in their own ability to share God's story effectively with others.

▼▲
Preben Vang is professor of Biblical and Theological Studies at Palm Beach Atlantic University in West Palm Beach, Florida. He and his family are natives of Denmark and moved to the United States from Copenhagen in 1997.

▼▲
I'm the author/artist and I want to review Telling God's Story: The Biblical Narrative from Beginning to End, Second Edition.
Back
×
Back
×