Skip to main content
Tell Me About Heaven
By: Randy Alcorn, Ron DiCianni
Stock No: WW348538 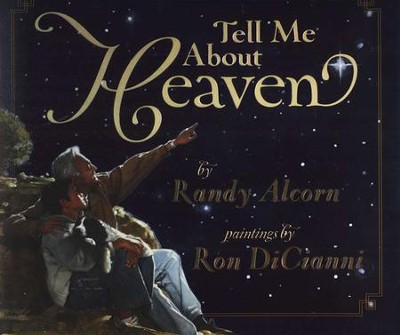 Tell Me About Heaven

▼▲
As Jake and Grandpa fish, watch the stars, and take long walks, Grandpa shares what the Bible says about the reality and beauty of heaven and Jake is comforted by learning where Grandma is. Breathtakingly illustrated by Ron DiCianni, Alcorn's simple, loving story will help grieving children and adults alike. 64 pages, 10" x 9" hardcover from Good News.

Gently guides adults and children to see what the Bible really has to say about Heaven and those who live there.

Ron DiCianni is the founder of MasterPeace Collection as well as owner of Art2See. He has been an illustrator for thirty years. After receiving recognition from a number of companies, DiCianni decided to dedicate his artistic talents to spreading the gospel. He is illustrator of This Present Darkness and Piercing the Darkness.

▼▲
Novelist and theological analyst Randy Alcorn has written extensively about heaven for both adults and young people. Now, in Tell Me About Heaven, he successfully makes theology about heaven something even children can understand. With the help of magnificent paintings by master artist Ron DiCianni, Alcorn creates a story about a young boy named Jake who comes to spend time with his grandfather just four months after the grandmother has died.
Jake is sad that his grandfather cannot cook as well as his grandmother, and he misses her voice, the attention she gave him, and her friendly smile. He confronts his grandfather, asking why his grandmother had to die. To his shock, the grandfather says that he misses his wife dearly, but he would not bring her back even if he could. This is because she is now in heaven with Jesus, suffering no ailments and having fun with her relatives and friends who passed before she did.
This prompts Jake to ask his grandfather where heaven is, what it is like, who is there, and what the "new heaven" will be like after saints' spirits are reunited with their bodies back on earth. In separate chapters, the grandfather (called Papa) discusses the Garden of Eden, Christ's birth on earth, Christ's conquering of the tomb, and even what it is like to make the transition from earth to heaven at the time of death. Everything is done in story form with lots of interactive dialogue between Papa and Jake as they go fishing, out walking with the family puppy, or just sit together at meals. Sometimes Jake reads from Papa's Bible, and other times Papa tells biblical stories or events from his life. The information is positive, affirming, non-threatening, yet completely solid scripturally.
This book can be read a chapter at a time over a week or more, or it can be read in one long session. The color paintings of angels (some of whom are African), historical figures such as Abe Lincoln, wild animals, and Jesus are detailed, elaborate, and powerfully graphic. They add a lot to the overall impact of the book's narrative. This is a book that will not become dated quickly.  Dr. Dennis E. Hensley, Christian Book Previews.com

▼▲
I'm the author/artist and I want to review Tell Me About Heaven.
Back
Back