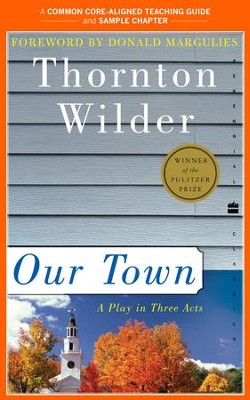 A Teacher's Guide to Our Town: Common-Core Aligned Teacher Materials and a Sample Chapter - eBook

We know that the Common Core State Standards are encouraging you to reevaluate the books that you assign to your students. To help you decide which books are right for your classroom, each free ebook in this series contains a Common Core–aligned teaching guide and a sample chapter.

This free teaching guide for Our Town by Thornton Wilder is designed to help you put the new Common Core State Standards into practice.

"Taking as his material three periods in the history of a placid New Hampshire town, Mr. Wilder has transmuted the simple events of human life into universal reverie. He has given familiar facts a deeply moving, philosophical perspective. . . . Our Town is one of the finest achievements of the current stage."—Brooks Atkinson

Our Town was first produced and published in 1938 to wide acclaim. This Pulitzer Prize-winning drama of life in the town of Grover 's Corners, an allegorical representation of all life, has become a classic. It is Thornton Wilder's most renowned and most frequently performed play.

Thornton Wilder (1897-1975) was an accomplished novelist and playwright whose works, exploring the connection between the commonplace and cosmic dimensions of human experience, continue to be read and produced around the world. His Bridge of San Luis Rey, one of seven novels, won the Pulitzer Prize in 1928, as did two of his four full-length dramas, Our Town (1938) and The Skin of Our Teeth (1943). Wilder's The Matchmaker was adapted as the musical Hello, Dolly!. He also enjoyed enormous success with many other forms of the written and spoken word, among them teaching, acting, the opera, and films. (His screenplay for Hitchcock's Shadow of Doubt [1943] remains a classic psycho-thriller to this day.) Wilder's many honors include the Gold Medal for Fiction from the American Academy of Arts and Letters, the Presidential Medal of Freedom, and the National Book Committee's Medal for Literature.

Amy Jurskis, the author of these teaching materials, holds a B.A. in English from the University of Georgia and a MAT from Agnes Scott College. A former department chair for language arts in a title one public school in Atlanta, she currently serves as a chairperson of curriculum and English teacher at Oxbridge Academy of the Palm Beaches.

▼▲
I'm the author/artist and I want to review A Teacher's Guide to Our Town: Common-Core Aligned Teacher Materials and a Sample Chapter - eBook.
Back
Back