Shipment delay - click here for more details
Takedown: From Communists to Progressive, How the Left Has Sabotaged Marriage and Family
By: Paul Kengor 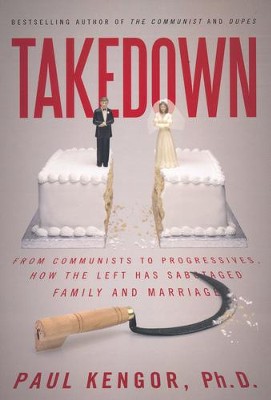 Takedown: From Communists to Progressive, How the Left Has Sabotaged Marriage and Family

▼▲
We are witnessing a watershed moment in American cultural history: the sabotaging of family and marriage. Extreme-left radicals have made their arguments and tried different tactics, from the early nineteenth century to the sexual revolution of the 1960s, American culture has now come to gay marriage. As the legal definition of marriage rapidly changes, the fundamental transformation of the American family will take on new dimensions. Efforts to redefine the family structure have been long at work, and there have been some influential forces on the far left that should not be ignored in that process.

In Takedown, Paul Kengor exposes these origins, starting with Karl Marx, and traces them through the history of people like Margaret Sanger, Wilhelm Reich, Herbert Marcuse, and assorted '60s radicals. What were once fringe concepts have become accepted by mainstream thought and are today welcomed by many legislators and judges. Kengor notes how in the not-so-distant past, today's leftists who are attacking traditional marriage would have loudly raised their voices but not caused any real damage. They would have been dismissed as agitators with no serious concern. But now, with formal legalization of same-sex marriage, they are getting what they've wanted for generations: the literal redefinition of the family.

Takedown exposes how gay marriage is serving as a Trojan horse for the far left to secure the final takedown of marriage that it has long wanted, and countless everyday Americans are oblivious to the deeper forces at work.

▼▲
I'm the author/artist and I want to review Takedown: From Communists to Progressive, How the Left Has Sabotaged Marriage and Family.
Back
×
Back
×