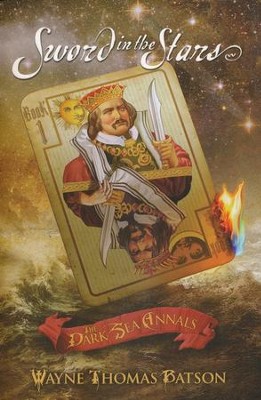 ▼▲
Haunted by his past, Alastair Coldhollow wagers his life on the hope that the foretold Halfainin will come. While searching for a sign, however, he becomes caregiver to an orphan just as he enters a maelstrom of conflict that tests loyalties and hatches dark schemes. Will he realize what he has before it's too late? 400 pages, softcover from Living Ink.

Centuries have passed since the Silence, and the few remaining faithful cling to the ancient prophecies of the First One.  They wait for the Caller and watch the skies for the Sword in the Stars, even as the world they've always  known unravels around  them.

Murderous Gorracks have secretly penetrated the kingdom's borders. Their attacks grow more brazen...more horrific, threatening to touch off a war on a scale  that hasn't been seen in seven ages.

In  the capital city of Anglinore, noble King Aravel ponders  the advice of  this twin brother Morlan:  declare all out war on the Gorrack nation.  While Anglinore's High Shepherd, the wise Sebastian Grenlaff urges caution and listens to troubling voices on the wind.

Queen Mariel, due to deliver a child any day, suspects the unthinkable about her husband's brother Morlan.  She sets off alone to Morlan's castle in Dunharrow, hoping against hope that she can keep old wounds from erupting in war.

Alastair Coldharrow,  tortured by an addiction to the outlawed Witchdrale and haunted by a violent past, wagers his life on the hope that the foretold Halfainin, the Pathwalker, would come.  When at  last, the Sword appears in the Stars, Alastair begins a fruitless search for the Halfainin that leaves him disillusioned, broken, and lost.  Used to caring only for himself, Alastair will enter a maelstrom of conflict as loyalties are tested, dark schemes are hatched, and  the many realms of Myriad brace  themselves for war.

Will Alastair realize what he has before its too late...for everyone?

Wayne Thomas Batson was born in Seabrook, MD in 1968. During the early years he tortured his older brothers and sisters, doing those things that only younger siblings can do to get on your nerves. Wayne  attended Gabriel Duval Senior High School and wrote this  for his yearbook. During his high school and early college years, he played lead guitar for a rock band called "Contagious."  They were catchy but apparently not enough to get a record deal. Having completed the rigorous Holmes English Literature Curriculum, he graduated from the University of Maryland, College Park in 1991. In 1996. he received his first graduate degree in counseling.  He has continued his studies with 36 credit hours of graduate-level reading courses.  Having spent the last fifteen years teaching Reading and English to middle school students, Wayne pioneered the active instruction of strategic reading in Anne Arundel County, Maryland, and has written Reading and English curricula for three public school districts in the state.  Wayne lives in Eldersburg  with his family.  Besides dividing his time between family, teaching, and writing, he likes to read, golf, play PS2, travel to  the beach, play electric guitar, and create 3D artwork.

▼▲
I'm the author/artist and I want to review Sword in the Stars, Dark Sea Annals Series #1.
Back