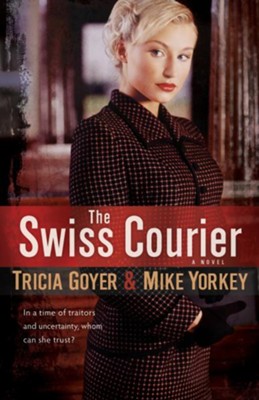 Swiss Courier, The: A Novel - eBook

▼▲
She's risking her life to save a man she doesn't know. But who can she trust along the way?

It is August 1944, and the Gestapo is mercilessly rounding up suspected enemies of the Third Reich following the assassination attempt on Adolf Hitler's life. Gabi Mueller is a young woman working for the newly formed American Office of Strategic Services (the forerunner to the CIA) in Basel, Switzerland. When she is asked to put herself in harm's way to safely "courier" a German scientist working on the atomic bomb project into Allied hands, the fate of the the world hangs in the balance. This fast-paced, suspenseful novel will whisk you along the treacherous twists and turns of a fascinating- and deadly- time in history.

▼▲
It is August 1944 and the Gestapo is mercilessly rounding up suspected enemies of the Third Reich. When Joseph Engel, a German physicist working on the atomic bomb, finds that he is actually a Jew, adopted by Christian parents, he must flee for his life to neutral Switzerland.

Gabi Mueller is a young Swiss-American woman working for the newly formed American Office of Strategic Services (the forerunner to the CIA) close to Nazi Germany. When she is asked to risk her life to safely "courier" Engel out of Germany, the fate of the world rests in her hands. If she can lead him to safety, she can keep the Germans from developing nuclear capabilities. But in a time of traitors and uncertainty, whom can she trust along the way?

This fast-paced, suspenseful novel takes readers along treacherous twists and turns during a fascinating--and deadly--time in history.

▼▲
Tricia Goyer is the author of several books, including Night Song and Dawn of a Thousand Nights, both past winners of the ACFW's Book of the Year Award for Long Historical Romance. Goyer lives with her family in Montana.

Mike Yorkey is the author or coauthor of dozens of books, including the bestselling Every Man's Battle series. Married to a Swiss native, Yorkey lived in Switzerland for 18 months. He and his family currently reside in California.

▼▲
Bestselling authors Goyer (Night Song) and Yorkey (Every Man's Battle series) collaborate for the first time in this WWII novel that centers around real historical events. Goyer and Yorkey open their text with a brief primer on the unsuccessful 1944 attempt on Adolf Hitler's life (dramatized in the movie Valkyrie). This story takes off immediately following that event; Hitler, bent on revenge, goes after anyone remotely capable of injuring him and sets up countless spies in key positions to take out persons with even the slightest Jewish heritage. Gabi Mueller, a Swiss-American woman who works for the American Office of Strategic Services, finds herself enlisted in safecracking, a job for which she is highly skilled. As Gabi seeks to make a difference in the face of evil, she is asked to help rescue a German physicist who is working on the atomic bomb. While her loyalties are not in question, Gabi struggles over whom to trust as the stakes become life and death. Goyer and Yorkey do a fine job presenting realistic characters and wartime scenarios; some readers, however, might find the sheer number of plot locations difficult to follow. (Oct.) Copyright 2009 Reed Business Information.

▼▲
I'm the author/artist and I want to review Swiss Courier, The: A Novel - eBook.
Back
Back