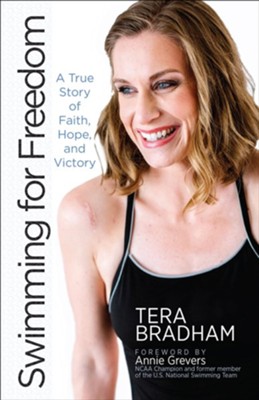 Swimming for Freedom: A True Story of Hope, Faith, and Victory

Swimming for Freedom tells the story of Tera Bradham's unconventional comeback and shows that through God, all things are possible. What started as an Olympic dream ended in her true miracle: the freedom of a life in Christ. Tera's story will inspire you to rise up, dream again, and fight for his calling on your life.

▼▲
Tera Bradham was born to prove people wrong. The fastest swimmer her age in the United States by age ten, many believed "Tera the Terror" was destined for the Olympics.

Her fiercely competitive spirit and unmatched intensity knew no limits until Tera suffered a sudden, devastating shoulder injury that derailed her promising career. Although she trusted in God, she also wrestled with doubts of his goodness throughout subsequent years of misdiagnoses, chronic pain, and crippling disappointment. Her injury finally forced her to fully surrender to God.

Then her miracle came, or so she thought. Her shoulder was successfully reconstructed, and after two more years of grueling recovery, Tera found the courage to swim again and pursue her dreams with renewed faith.

Swimming for Freedom tells the story of Tera’s unconventional comeback and shows that through God, all things are possible. What started as an Olympic dream ended in her true miracle: the freedom of a life in Christ. Tera’s story will inspire you to rise up, dream again, and fight for his calling on your life.

▼▲
Tera Bradham is an author and speaker, but she has also been a Spanish teacher, a swimming coach, a journalist, and a travel vlogger. After growing up in Round Rock, Texas, she swam for the University of Arkansas and for Texas A&M University before heading to South America on a year of missions with the World Race. God added another plot twist to her life when she met the man of her dreams, who happened to be from Montana. She now relishes the beauty of Bozeman’s mountains each day with her husband, Jacob. Her heart’s deepest passion is for others to know her extraordinary God who makes every day a miraculous adventure.

▼▲
Swimming for Freedom is a must-read for anyone who has participated in a sport or had a setback in life. Tera's journey is the ultimate comeback story of someone who persevered in faith through impossible odds to accomplish her dream.
- Josh Davis, three-time Olympic Gold Medalist

Swimming for Freedom shows how God can heal with just a mustard seed of faith. Tera’s story is proof that you can find so much more freedom in what he has planned for your life than what you have planned. Tera’s daily sacrifice to press into God’s voice will challenge you to do the same and find the freedom and healing God has for your life.
- Bethany Galat, Silver Medalist at World Championships

Tera's perseverance and ultimate redemption is a tale to be shared. How much pain can a human endure, even when they have a competitive fire off the charts like her? In her honor, I dedicated my morning swim set to Tera the Terror! I'm fifty-five years old, and the pain I felt was nothing compared to what she experienced. Thinking of her helped me through the worst parts. Bravo, Tera, for capturing the essence of your unique and incredible journey into words.
- Mike Koleber, Owner of Nitro Swimming

Athletes do amazing things when they want to reach their goals. Tera is one of those athletes and has the heart and mind of a champion. Despite her injury and the people who told her she wouldn't reach her goals, she made all of us proud.
- Steve Bultman, Head Coach, Texas A&M University, Women’s Swimming

From the very first page of Swimming for Freedom, I was hooked and deeply inspired. I couldn’t put the book down. While reading about Tera’s riveting tales of struggle and triumph, I wondered how I, too, would have responded. I highly encourage you to get two copies of this book: one for you and one for the person in your life who might be going through a personal hell. The pages of her story will inspire you and challenge your way of life.
- Josh Foliart, founder of MULTIPLi Global
Foreword:
When I started working for Swimming World Magazine in 2014, I envisioned myself as a full-time feature writer. I wanted nothing more than the job description I was presented, which included overseeing the college internship program as well.

I sat across from my new boss and future colleague as they described the freshly contrived internship program. It sounded like a disaster. One employee was attempting to edit for and send feedback to over thirty inexperienced college writers while also posting their own stories to Swimming World’s online platform. I tried not to shudder at the prospect of taking the wheel of such an out-of-control vehicle.

The majority of my job became editing for and corresponding with college interns, most of whom were college swimmers. In order to apply for the internship, applicants had to submit a writing sample. I read through the samples and took notes on each entry as they came in. Rarely was I blown away. These were student athletes after all, which meant their priorities were school, sport, and then this potential extracurricular, unpaid internship. I graded each entry on a spreadsheet, and one name stood out from the get-go: "Tera Bradham. Texas A&M. A++++." I loved her writing style. You knew a big heart pumped out such passionate words.

Tera was accepted to the program, and as I became better acquainted with her, I began to see her gritty nature in full light. She swam the hardest events in the collegiate lineup and was in the midst of a comeback from a nearly decade-long agonizing bicep/shoulder injury. Oh, not to mention she was also getting her masters while swimming at a Division I school.

I was a D-I swimmer and national champion breaststroker for the University of Arizona. I’m married to a four-time Olympic gold medalist swimmer. I have experienced and witnessed what it takes to make it to the pinnacle of the sport. Tera had put in the training and climbed the ladder prior to this injury. She experienced excruciating, involuntary back-pedaling in her swimming career because no one could figure out what was wrong. She had no idea how long this train wreck of misdiagnoses could last.

We have all been stuck at some point. We’ve had our hands-in-the-air moments when we plead with God, "What on earth could be beneficial from within this dark cavity of my life?" Janet Erskine Stuart said, "Joy is not the absence of suffering but the presence of God." This life hurts. And our culture tells us it shouldn’t. But the Bible never makes such a shaky claim. The greatest human to ever live knew he was not placed on earth to live a life of luxury but to be tortured, mocked, and executed for the sake of those who dragged him through earthly hell.

Our sense of time is minuscule compared to God’s. 1 Peter 5:10 says, "After you have suffered for a little while, the God of all grace who called you to his eternal glory in Christ, will Himself perfect, confirm, strengthen and establish you." Our suffering "a little while" can mean a year, a decade, or an entire earthly lifetime. Humans cannot take on a full-time heaven-minded perspective in the deepest ruts of life. Tera didn’t. Doctor after doctor failed to restore her and left her with few choices. Either she had to find her hope outside of the operating room or her struggle would become her demise.

Perhaps you’re like me and have only recently been thrown for a loop in your otherwise blessed life. Maybe you’re like Tera, and you’ve been struggling for years to understand the "why" behind your pain. We all inevitably experience pain during our short stay on earth, but that doesn’t mean we must also experience hopelessness. 2 Corinthians 4:17–18 says, "For momentary light affliction is producing for us an eternal weight of glory far behind all comparison. For the things which are seen are temporal but the things which are not seen are eternal." There’s so much we cannot see from beneath the dark veil of trying circumstances. But light cannot be shut out by a thin veil.

In Swimming for Freedom, you will come to know Tera’s tenacious spirit and her road to ultimate freedom, which might not resemble our worldly definition of freedom. Her story will help you see the light of hope through your own weighty circumstances. Whether you’re fighting through chronic pain physically, emotionally, or spiritually, Tera’s journey will meet you where you are, serving as an empathetic voice of encouragement as to what these trying circumstances could mean for your future. And even if you’ve reached a point of utter despair, she will remind you that no body, mind, or soul is beyond repair.

▼▲
I'm the author/artist and I want to review Swimming for Freedom: A True Story of Hope, Faith, and Victory.
Back
Back