I Survived #7: I Survived the Battle of Gettysburg, 1863
By: Lauren Tarshis 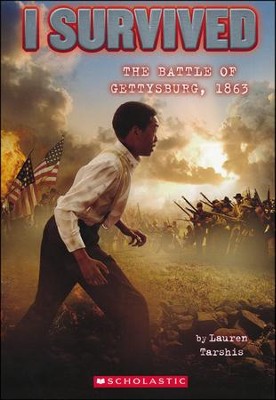 ▼▲
11-year-old Thomas and his 5-year-old sister Birdie have run away from the farm where they were born and raised as slaves. As they head north for freedom, they cross paths with a Union solder and everything changes as they are brought back to the soldier's regiment and are marching with the army. But when the men are called to battle in Pennsylvania, will Thomas manage to survive the bloodiest battle in American history.

▼▲
The bloodiest battle in American history is under way . . .
It's 1863, and Thomas and his little sister, Birdie, have fled the farm where they were born and raised as slaves. Following the North Star, looking for freedom, they soon cross paths with a Union soldier. Everything changes: Corporal Henry Green brings Thomas and Birdie back to his regiment, and suddenly it feels like they've found a new home. Best of all, they don't have to find their way north alone--they're marching with the army.

But then orders come through: The men are called to battle in Pennsylvania. Thomas has made it so far . . . but does he have what it takes to survive Gettysburg?

▼▲
Lauren Tarshis's New York Times bestselling I Survived series tells stories of young people and their resilience and strength in the midst of unimaginable disasters. Lauren has brought her signature warmth and exhaustive research to topics such as the September 11 attacks, the destruction of Pompeii, Hurricane Katrina, and the bombing of Pearl Harbor, among others. She lives in Connecticut with her family, and can be found online at laurentarshis.com.

Praise for I SURVIVED THE SHARK ATTACKS OF 1916:

"This is a gripping story that will hold the interest of reluctant readers." --SCHOOL LIBRARY JOURNAL

Praise for I SURVIVED HURRICANE KATRINA, 2005:

"Expressive illustrations capture the drama of the storm and its aftermath, but the book's real power comes from its exploration of what it means to be a hero." --BOOKLIST