Skip to main content
CYBER WEEK SALE! Spot great deals up to 88% off. >
A Rabbi Looks at the Last Days: Surprising Insights on Israel, the End Times and Popular Misconceptions
By: Jonathan Bernis
Stock No: WW795436 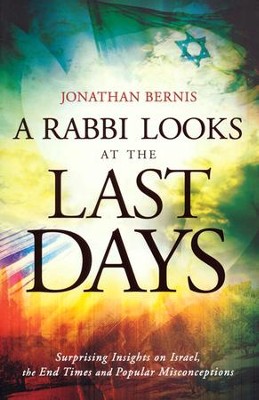 A Rabbi Looks at the Last Days: Surprising Insights on Israel, the End Times and Popular Misconceptions

▼▲
A life-changing look at the end times from a Messianic Jewish perspective! Countering notions that future turmoil in the Middle East and the beast's mark herald the last days, Rabbi Bernis points to a sign happening now---the fulfillment of Old Testament prophecies regarding Israel's restoration. Join him as he reveals God's hope to those who accept Yeshua HaMashiach. 240 pages, softcover from Chosen.

▼▲
A Rabbi Offers a Fresh Look at the End Times

Few topics capture the imagination of believers like the last days. Yet fear and incorrect teachings continue to surround this topic. Rabbi Jonathan Bernis, by contrast, offers with warmth and clarity a unique and surprising perspective on the end times.

Many see explosive turmoil in the Middle East and the mark of the beast as signs of the return of the Messiah. Bernis points out an even clearer and more immediate sign: the fulfillment of Old Testament prophecies regarding the restoration of the land of Israel and the regathering of the Lost Tribes of Israel--which is happening in record numbers right now. This book unpacks surprising and life-changing insights on Israel, the last days, and the Messianic hope of every believer.

▼▲
Jonathan Bernis, president and CEO of Jewish Voice Ministries International, is the author of a number of popular books. He has been a leader in the Messianic Jewish Movement for over 30 years, serving as founding rabbi of congregations in Rochester, New York, and St. Petersburg, Russia. His weekly television show, Jewish Voice with Jonathan Bernis, is seen throughout the United States, Canada, Israel, the United Kingdom, Europe, and Asia. Jonathan has been interviewed on numerous media outlets, including Moody's In the Market with Janet Parshall and Chris Fabry Live! He and his family live in Phoenix, Arizona.

▼▲
I'm the author/artist and I want to review A Rabbi Looks at the Last Days: Surprising Insights on Israel, the End Times and Popular Misconceptions.
Back
Back