The Supernatural Power of Forgiveness: Discover How to Escape Your Prison of Pain and Unlock a Life of Freedom
By: Kris Vallotton, Jason Vallotton 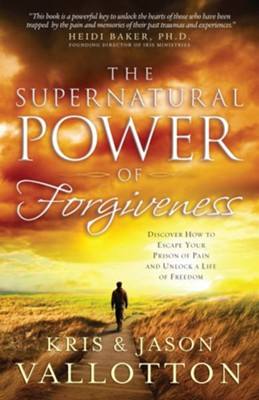 The Supernatural Power of Forgiveness: Discover How to Escape Your Prison of Pain and Unlock a Life of Freedom

▼▲
Following his wife's affair, Jason Vallotton thought his world was ending. Now using his story as a powerful illustration of God's grace and healing, he and his father, Kris, will help you reframe your understanding of redemption. Discover how the Lord can use your wounds to equip you for a whole, fulfilled, and powerful life! 205 pages, softcover from Chosen.


Jason Vallotton thought his world was burning down around him when he found out that his wife, Heather, was having an affair and planned to leave him. Using his own story as a poignant, evocative illustration of God's grace and healing, Jason, along with his dad, Kris Vallotton, invites you to reframe your understanding of redemption. Together, they show you how to steward the hardest times and deepest pain of your life so that God can lay a foundation for complete restoration and empowerment for your future. While it may be hard to see emotional wounds as gifts when they still hurt so deeply, The Supernatural Power of Forgiveness will help you discover that God can not only heal your wounds, but He can also use the healing process to equip you for a whole, fulfilled and powerful life!

▼▲
Kris Vallotton is the senior associate leader at Bethel Church in Redding, California, where he has served with Bill Johnson for three decades. He has written several books, including the bestselling The Supernatural Ways of Royalty and Heavy Rain. His prophetic insight and humorous delivery make him a much-sought-after international conference speaker, and his personal testimony of deliverance from fear and torment brings hope and freedom to thousands. Kris is also the cofounder and senior overseer of the Bethel School of Supernatural Ministry, which has grown to more than 1,300 full-time students, as well as the founder of Moral Revolution, an organization dedicated to cultural transformation. He has appeared on numerous media outlets, including The 700 Club. Kris and his wife, Kathy, live in Redding, California.

▼▲
I'm the author/artist and I want to review The Supernatural Power of Forgiveness: Discover How to Escape Your Prison of Pain and Unlock a Life of Freedom.
Back
×