Skip to main content
Get Christmas Ready Sale: Deals on over 1,150 titles thru 9/27.
Supernatural Finances: Heaven's Blueprint for Blessing and Increase - eBook
By: Kevin Zadai
Stock No: WW101780EB 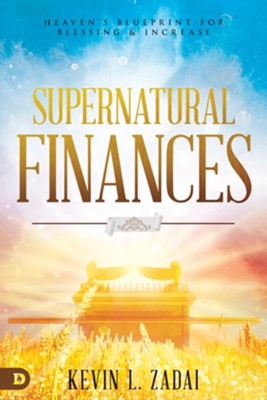 ▼▲
Discover the Pattern in Heaven to Financial Abundance!

God is building His Kingdom on the Earth and He is inviting you to join Him!  God has placed you in a unique sphere of influence. He’s given you gifts, talents, and abilities so you can release Heaven’s solutions and strategies into the Earth. When you join in what God is doing, you will immediately step into the realm of Heaven’s abundance and blessing!

Supernatural Finances will give you unique glimpses into the invisible realm of God’s Kingdom financial system that will help you to: You have a supernatural advantage: access to the unlimited supply of Heaven’s economic system. Discover how to engage and partner with the Holy Spirit in your finances and step right into the greatest move of God the world has ever seen!

▼▲
Kevin Zadai, ThD is dedicated to training Christians to live and operate in two realms at once—the supernatural and the natural. Called to ministry at age 10, he attended Central Bible College in Springfield, Missouri, where he received a bachelor’s degree in theology. Later, Kevin received training in missions at Rhema Bible College. At age 31, during a routine surgery, he found himself on the "other side of the veil" with Jesus in a heavenly visitation that forever marked his life. This encounter ushered his ministry into new dimensions of power, activation, and impartation. Kevin is retired after being employed by Southwest Airlines for 29 years; he and his wife, Kathi, reside in New Orleans, Louisiana, and are ordained by Dr. Jesse and Dr. Cathy Duplantis.

▼▲
I'm the author/artist and I want to review Supernatural Finances: Heaven's Blueprint for Blessing and Increase - eBook.
Back
Back