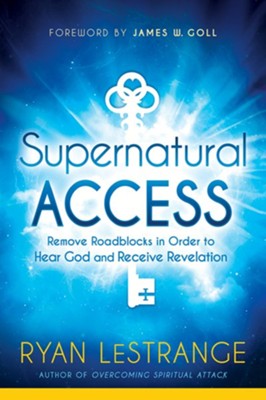 ▼▲
In Supernatural Access prophetic minister Ryan LeStrange teaches you how to really hear God, break off the lies of the enemy, and act on the revelation you receive to demonstrate God's power. We are supernatural people called to manifest the kingdom of God!

▼▲
Sharpen your spiritual senses. God may be speaking in ways you don't expect.

This book is a manifesto for supernatural living, God encounters, and radical prophetic leading. You are standing at the doorway into greater dimensions of the Spirit. Mundane living is not your portion, and watered-down revelation is not your inheritance. You can be effectively led by Holy Spirit. You can know and discern the will of God for your life. You can operate in tremendous miracles and authority. You can receive and walk in more. The supernatural life is for you!

In Supernatural Access prophetic minister Ryan LeStrange teaches you how to really hear God, break off the lies of the enemy, and act on the revelation you receive to demonstrate God’s power. We are supernatural people called to manifest the kingdom of God!

▼▲
Ryan LeStrange is an apostolic leader and prophetic voice. The apostolic call on his life has led him to build multiple ministries in various geographical locations, the foremost being Ryan LeStrange Ministries. Ryan, a modern-day revivalist, moves strongly in the power of God as he travels the globe igniting revival fires. His conferences and gatherings are alive with prophetic declaration, miracles, healings, and powerful preaching. Ryan is the founder and apostolic leader of TRIBE Network, a global network of ministries. He is also cofounder of AwakeningTV.com, a media channel created to host revival-inspired services featuring ministers and messages both past and present. Ryan has authored several books, including Releasing the Prophetic;Revival Hubs Rising, coauthored with Jennifer LeClaire; and Overcoming Spiritual Attack. Ryan and his wife, Joy, have a son, Joshua, and currently reside in Virginia.

▼▲
I'm the author/artist and I want to review Supernatural Access: Removing Roadblocks in Order to Hear God and Receive Revelation.
Back
×
Back
×