Skip to main content
THE MEGA CHRISTMAS SALE: Save up to 85% off through 10/19 >
Summoned from the Margin: Homecoming of an African
By: Lamin Sanneh
Stock No: WW867421 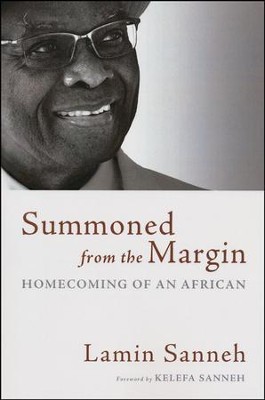 Summoned from the Margin: Homecoming of an African

▼▲
Reviews in Religion & Theology
"Captivates from beginning to end. . . . A beautifully written, memorable, and moving autobiography."

National Catholic Reporter
"A wonderful read about the processes of cross-cultural engagement."

Dana L. Robert
— Boston University
"At once brave, lyrical, and profoundly moving, this book traces the life of one of the world's great scholars. Lamin Sanneh illuminates the contours of an African childhood, the relationship between Islam and Christianity, and the ongoing challenges of bridging racial and cultural differences. This powerful memoir is both a timely commentary on issues in world Christianity and a timeless masterpiece of the human spirit."

Jonathan J. Bonk
— Overseas Ministries Study Center
"A riveting modern-day Pilgrim's Progress by a leading world Christian intellectual — eloquent but not verbose, profound but not obscure, lucid but not clich&eacute;d. Rare is the memoir that engages its reader from beginning to end. Lamin Sanneh's is one of those."

John Sentamu
— Archbishop of York
"Sanneh's personal journey from childhood roots in the Gambia is told with refreshing delight in a wonderfully kaleidoscopic account of people and places along the way. . . . As a multilayered personal testimony from the place where civilizations meet, this is truly a captivating read."

Philip Jenkins
— Baylor University
"I've always found Lamin Sanneh one of the very best analysts of contemporary Christianity worldwide, but my admiration for him grows still more when I read this disarmingly honest and instructive autobiography. Read it if you want to learn not just about Lamin Sanneh himself, or world Christianity, but about West Africa, Islamic-Christian relations, the process of religious conversion, and a host of other matters. Or just enjoy a really well-written autobiography!"

Patrick J. Ryan
— Fordham University
"For most of the four decades I have known Lamin Sanneh, I have urged him to write a memoir of his personal pilgrimage. At last my prayer has been answered! I treasure this marvelous addition to the history of Christian and African autobiography that reaches back to Saint Augustine."

Gavin D'Costa
— University of Bristol
"Lamin Sanneh's autobiography is moving, humble, and very thought-provoking. A convert to Christianity from Islam and now a leading missiologist at Yale, Sanneh speaks simply from a rich and sensitive Christian faith. . . . He has the rare quality of a top academic as well as a humane and spiritually discerning communicator."

John B. Carman
— Harvard Divinity School
"This moving narrative vividly portrays the many stages of Lamin Sanneh's religious journey, connecting his personal experiences on four continents with major cultural shifts in the last fifty years. . . . Sanneh offers a sobering critique of Western Protestantism and explains his confidence in the progress of African Christianity, expressed in the mother tongue. His painful memories of multiple rejections should sharpen our reflection on our Christian past and present."

Touchstone
"Lamin Sanneh, a highly respected professor of World Christianity at Yale University, presents us with a sketch of his fascinating life's journey. . . . An important book for all who struggle with understanding the Christian journey of faith in a world that takes so much of it for granted."

Missiology
"Would you like to meet the Professor of World Christianity at Yale University in person? ReadSummoned from the Margin where you will encounter a humble, vulnerable genius. . . . This memoir is a 'must read' for pastors, missionaries, seminary professors, and students."

Living Church
"The circuitous path of Sanneh's homecoming, as the journey of an incisive mind and searching spirit, will captivate those interested in the Gambia and West Africa, interfaith dialogue, religious conversion, religious history, and world Christianity."

Religious Studies Review
"An engaging story, a superior conversion narrative and a rich and irenic discussion of a variety of cultures and religions."

Anglican Theological Review
"Lamin Sanneh's new memoir, Summoned from the Margin, begins the long process of helping Christians in the West come to terms with what Christianity means in its new heartland. . . . Sanneh's outsider status gives him a perch from which to reflect on the Euro-Atlantic church. His comments are incisive. . . . He makes the truth come alive in a deeply personal and moving way."

Church Times
"Raised a Muslim in British West Africa, Sanneh converted to Christianity as a young man. InSummoned from the Margin, he steps away from academia, and tells the story of his journey into and through the church. It is a compelling tale."

World
"A wonderfully evocative memoir of moving from childhood Islam in Gambia to a faith in Christ."

Christianity Today
"Sanneh, though of royal lineage, grew up in a poor Muslim family in the colonial Gambian village. . . . Today, however, he is an accomplished Christian scholars whose influence traverses multiple continents. . . . In Summoned from the Margin he reflects on the many steps and divisions that shaped this unlikeliest of biographies."

International Bulletin of Missionary Research
"This remarkable book operates on a variety of levels. It is at once a personal memoir, a conversion and pilgrimage story; a running journal of travel and tasks, people and places; and an intellectual excursion. . . . A remarkable intellectual biography. . . . It is a valuable gift indeed."

Publishers Weekly
"Sanneh, who teaches at Yale, begins this multireligious and multicultural memoir with stories of his childhood in Gambia in a Muslim polygamous home. . . . His story is not about race but about interfaith dialogue, appreciation, and faith."

Christian Century
"Summoned from the Margin is a gentle, constantly engaging, irenic and revealing story of how North American theological education received the gift of Lamin Sanneh. . . . Sanneh wants us to read his life as the work of a God who creates, calls, summons and evokes. It could well be Sanneh's most enduring work and may well be destined to take its place as one of the great spiritual autobiographies of our age."

Mission Studies
"Provides the reader a window into Sanneh's intellectual and spiritual journey. . . . A helpful companion to scholars seeking to understand world Christianity and interfaith dialogue. It not only provides a rare insight both into the life and thought of a leading Christian theologian, but also summarizes the present situation of world Christianity both as a phenomenon and as an academic field. Seminarians and students of religion would benefit immensely from it."

▼▲
I'm the author/artist and I want to review Summoned from the Margin: Homecoming of an African.
Back
Back