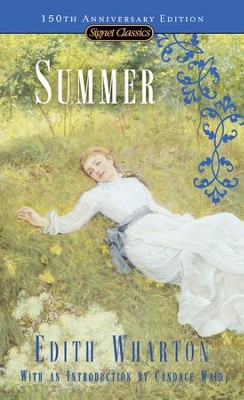 ▼▲
In 1917, when Edith Wharton published Summer, she was living in a France "steeped in the tragic realities of war." Yet she set this book far away from Paris in the same dark, rigid New England she used for Ethan Frome. In such a place, she explored her most daring theme—a woman’s awakening to her sexual needs. The novel’s heroine, eighteen-year-old Charity Royall, is bored in the small town of North Dormer and ignorant of desire until she meets a visiting architect, Lucius Harney. Like the lush summer of the Berkshires around them, their romance is shimmering and idyllic, but its consequences are harsh and real. And the book, for its early twentieth-century audience, was shocking. Wharton’s pellucid prose, her raw depiction of the mountain community where Charity was born, the intrusion into Charity’s bedroom by her guardian, Lawyer Royall, and Charity’s rites of passage into adulthood elevate Summer into a groundbreaking study of society, nature, and human needs. Joseph Conrad prized this gem of a novel. The author herself favored it, and now the modern reader can experience the most erotic fiction Edith Wharton ever wrote with this handsome edition.

▼▲
The upper stratum of New York society into which Edith Wharton was born in 1862 provided her with an abundance of material as a novelist but did not encourage her growth as an artist. Educated by tutors and governesses, she was raised for only one career: marriage. But her marriage, in 1885, to Edward Wharton was an emotional disappointment, if not a disaster. She suffered the first of a series of nervous breakdowns in 1894. In spite of the strain of her marriage, or perhaps because of it, she began to write fiction and published her first story in 1889.Her first published book was a guide to interior decorating, but this was followed by several novels and story collections. They were written while the Whartons lived in Newport and New York, traveled in Europe, and built their grand home, the Mount, in Lenox, Massachusetts. In Europe, she met Henry James, who became her good friend, traveling companion, and the sternest but most careful critic of her fiction. The House of Mirth (1905) was both a resounding critical success and a bestseller, as was Ethan Frome (1911). In 1913 the Whartons were divorced, and Edith took up permanent residence in France. Her subject, however, remained America, especially the moneyed New York of her youth. Her great satiric novel, The Custom of the Country was published in 1913 and The Age of Innocence won her the Pulitzer Prize in 1921.In her later years, she enjoyed the admiration of a new generation of writers, including Sinclair Lewis and F. Scott Fitzgerald. In all, she wrote some 30 books, including an autobiography, A Backward Glance (1934). She died at her villa near Paris in 1937.

▼▲
I'm the author/artist and I want to review Summer(150th Anniversary Edition) - eBook.
Back
×
Back
×