Skip to main content
SPRING CYBER EVENT STARTS NOW: And it's a really BIG deal! Up to 88% off through 5/24>
8 Secrets to Raising Successful Kids: Nurturing Character, Respect, and a Winning Attitude
By: Dr. Kevin Leman
Stock No: WW734692 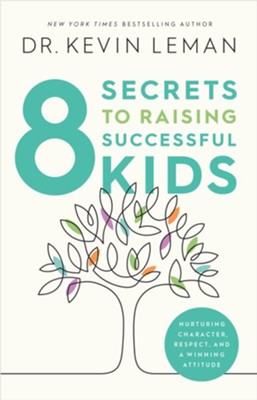 ▼▲
You can raise children who are kind, grateful, and respectful---even in a generation whose favorite word is "whatever"! Dr. Leman shows you how to utilize eight winning strategies that encourage a healthy self-image, strong character, and a good work ethic in order to set your kids up for success in their personal and professional lives and relationships. 256 pages, hardcover from Revell.

▼▲
Want children who are patient, kind, humble, thankful, and respectful? Who have a good work ethic, strong character, and a healthy self-image? Who succeed in all areas of life--personally, professionally, and relationally--to the best of their ability?

You can't force your kids to be grateful for everything you do, but you can raise successful, responsible kids who grow into adults you can be proud of. With his signature wit and wisdom, international parenting expert Dr. Kevin Leman reveals eight no-nonsense strategies that build on the foundations of character, good behavior, respect, discipline, and a winning attitude.

He shows you how to

It is possible to raise a successful child in a "whatever" generation. Dr. Leman shows you just how simple it can be.

▼▲
Dr. Kevin Leman is an internationally known psychologist, radio and television personality, and speaker. Cohost of the extremely popular Have a New Kid by Friday podcast, he has made house calls through hundreds of radio and television programs, such as FOX & Friends, The View, FOX's The Morning Show, Today, Morning in America, The 700 Club, CBS's The Early Show, Janet Parshall, CNN, and Focus on the Family, and has served as a contributing family psychologist to Good Morning America. A bestselling and award-winning author, Dr. Leman has written more than 60 books, including The Birth Order Book and Have a New Kid by Friday. He is the founder of Leman Academy of Excellence, an award-winning group of classical charter schools located throughout Arizona and Colorado. Dr. Leman and his wife, Sande, live in Tucson, Arizona. They have five children and four grandchildren.

▼▲
I'm the author/artist and I want to review 8 Secrets to Raising Successful Kids: Nurturing Character, Respect, and a Winning Attitude.
Back
Back