Skip to main content
Win at Work and Succeed at Life: 5 Principles to Free Yourself from the Cult of Overwork
By: Michael Hyatt, Megan Hyatt Miller
Stock No: WW094699 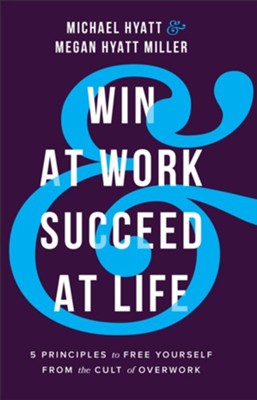 Win at Work and Succeed at Life: 5 Principles to Free Yourself from the Cult of Overwork

By: Michael Hyatt, Megan Hyatt Miller
Baker Books / 2021 / Hardcover
5 out of 5 stars for Win at Work and Succeed at Life: 5 Principles to Free Yourself from the Cult of Overwork (9 Reviews) Write a Review
In Stock
Stock No: WW094699

▼▲
Refuse the false choice of career or family---Hyatt and Miller believe you can have both! With clarity, humor, and motivation, they provide a historical and cultural background of the forces that lead to overwork, five principles to help you rethink productivity, simple but proven ways to slow down and reclaim your life, and more. 208 pages, hardcover from Baker.

▼▲
Great leaders are driven to win. Yet career wins can come at great cost to your health, relationships, and personal well-being. Why does it seem impossible to both win at work and succeed at life?

Michael Hyatt and Megan Hyatt Miller know we can do better because he's seen it in his more than four decades as a successful executive and a loving and present husband and father. Today Michael and his daughter, Megan Hyatt Miller, coach leaders to live the double win. Backed by scholarly research from organizational science and psychology, and illustrated with eye-opening case studies from across the business spectrum and their own coaching clients, Win at Work and Succeed at Life is their manifesto on how you can achieve work-life balance and restore your sanity.

With clarity, humor, and plenty of motivation, Win at Work and Succeed at Life gives you
- an understanding of the historical and cultural forces that have led to overworking
- 5 principles to rethink work and productivity from the ground up
- simple but proven practices that enable you to slow down and reclaim your life
- and more

Refuse the false choice of career versus family. You can achieve the double win in life.

▼▲
Michael Hyatt is the founder and chairman of Michael Hyatt & Company. He has scaled multiple companies over the years, including a $250M publishing company with 700-plus employees and his own leadership development company that has grown over 60 percent year over year for the past four years. Under his leadership, Michael Hyatt & Company has been featured in the Inc. 5000 list of the fastest-growing companies in America for three years in a row. He is also the author of several New York Times, Wall Street Journal, and USA Today bestselling books, including Platform, Living Forward, Your Best Year Ever, Free to Focus, and The Vision Driven Leader. He's living the Double Win with his wife of forty-plus years, five daughters, and nine grandchildren.

Megan Hyatt Miller is the president and chief executive officer of Michael Hyatt & Company. Cohost of the popular business podcast Lead to Win, she is also Michael's oldest daughter. As the architect of Michael Hyatt & Company's standout culture, she is committed to helping her team win at work and succeed at life, while also delivering phenomenal results to their customers. Under her leadership, Michael Hyatt & Company was named as one of Inc. Magazine's Best Workplaces for 2020, which ranks the top companies in America for their employee engagement. When she's not taking the company to new heights, she's fully present at home with her husband and five kids in Franklin, Tennessee.

▼▲
I'm the author/artist and I want to review Win at Work and Succeed at Life: 5 Principles to Free Yourself from the Cult of Overwork.
Back
Back