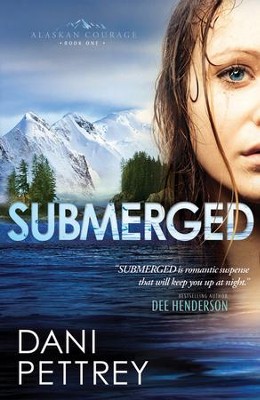 ▼▲
Bailey Craig vowed never to set foot in Yancey, Alaska, again. She has a past reputation, and Yancey's a town that doesn't forget. She's returned only to bury her beloved aunt killed in the mysterious plane crash.

Cole McKenna faces dangerous rescue dives and he faces the fear that a murderer may be threatening his town. But facing the reality of Bailey's reappearance is a tougher challenge. She broke his heart...

▼▲
"Submerged is romantic suspense that will keep you up at night!"--Bestselling Author Dee Henderson

Yancey, Alaska was a quiet town...until the truth of what was hidden in the depths off the coast began to appear.

Bailey Craig vowed never to set foot in Yancey again. She has a past, and a reputation--and Yancey's a small town. She's returned to bury a loved one killed in the plane crash and is determined not to stay even an hour more than necessary. But then dark evidence emerges and Bailey's own expertise becomes invaluable for the case.

Cole McKenna can handle the deep-sea dives and helping the police recover evidence. He can even handle the fact that a murderer has settled in his town and doesn't appear to be moving on. But dealing with the reality of Bailey's reappearance is a tougher challenge. She broke his heart, but she is not the same girl who left Yancey. He let her down, but he's not the same guy she left behind. Can they move beyond the hurts of their pasts and find a future together?

▼▲
Dani Pettrey is a wife, homeschooling mom, and author. She feels blessed to write inspirational romantic suspense because it incorporates so many things she loves--the thrill of adventure, nailbiting suspense, the deepening of her characters' faith, and plenty of romance. She and her husband reside in Maryland with their two teenage daughters. Visit her website at www.danipettrey.com.

▼▲
A man and woman who were once a couple confront their past in a brush with a treasure-seeking killer in this steadily paced thriller. Bailey Craig left her small Alaskan hometown 12 years ago and vowed shed never return. But when her beloved Aunt Agnes dies in a plane crash, shes forced to revisit the placeand some of her demons. Meanwhile, a former boyfriend, Cole McKenna, runs a local diving shop and helps police whenever they need his underwater expertise. When the authorities find the body of an alleged tourist who rented from his shop and another not long after, he realizes he needs Baileys expertise in Russian to help decipher some of the clues. With the help of a 19th-century diary, will they find the murderer or only end up in harms way? Pettreys debut novel is a thoughtful attempt to capture both love and suspense in this intricately plotted mystery. While the writing is clumsy at times, the novel introduces the reader to some memorable characters who must rely on their faith just as much as each other. Agent: Chip MacGregor. (May)2012 Reed Business Information

▼▲
I'm the author/artist and I want to review Submerged, Alaskan Courage Series #1.
Back
Back