Skip to main content
Get Christmas Ready Sale: Deals on over 1,150 titles thru 9/27.
Studies in the Bible and Jewish Thought
By: Moshe Greenberg
Stock No: WW05048 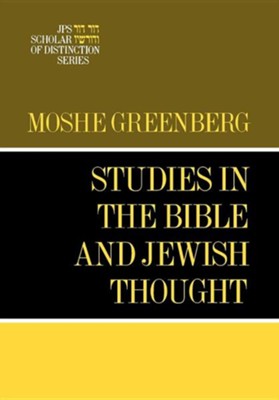 Studies in the Bible and Jewish Thought

▼▲
One of the world's foremost Bible experts, Dr. Greenberg's viewpoint has been shaped by the study of the ancient Near Eastern context of biblical Israel and the history of the interpretation of the Bible from its earliest translations until today. He regards the text with admiration for its enduring power, for the features that set it apart from the literatures of surrounding cultures, and for the riches discovered in it through the ages by "faith-full" interpreters. For Dr. Greenberg, the Jewish Bible scholar is, ultimately, charged with the task of identifying and explaining the impact that Hebrew scriptures have had on humanity in general and on Judaism in particular. These essays, composed during a period of some forty-five years, are presented essentially in their original form, many with newly added notes by the author; some of the essays have never before been published.

▼▲
In this collection of essays, Dr. Moshe Greenberg, one of world's foremost Bible experts, stays true to the task of the classical Jewish scholar: to enhance the Bible in the eyes of the faith/cultural community by seeking to set forth existential values embodied in the biblical narratives, laws, and rituals, and pointing to the continuities and transformations of the biblical materials in later Jewish creativity.

▼▲
I'm the author/artist and I want to review Studies in the Bible and Jewish Thought.
Back