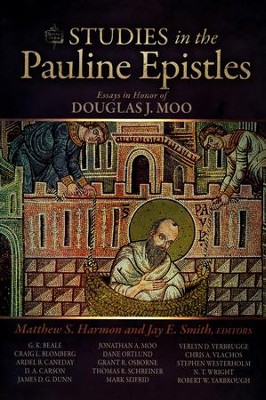 Studies in the Pauline Epistles: Essays in Honor of Douglas J. Moo

Douglas J. Moo has had a long and illustrious career as a scholar, teacher, mentor, and colleague. He has taught at two major evangelical schools and, through both his teaching and his writing, has impacted the lives of hundreds of thousands of students, pastors, and laypeople. This Festschrift, Studies in the Pauline Epistles: Essays in Honor of Douglas Moo is intended to honor Moo for his significant contributions to both church and academy.

As Doug has manifested himself as a wise handler of the biblical text by writing major commentaries on many of Paul's writings for various publishers, the first section of this book, "Exegeting Paul," contains essay on various passages of the apostle intended to honor Doug as both an exegete and a Bible translator. The second section, containing essays on "Paul's Use of Scripture and the Jesus Tradition," highlights the significant contributions Moo has made—be it in lectures he has presented or articles he has written—to Paul's use of the Old Testament. Although he remains an advocate of the Old Perspective, Doug has not been afraid to acknowledge points where the New Perspective has shed light on the apostle and his letters. Thus, the third and final section of this collection of essays deals with "Pauline Scholarship and His Contemporary Significance."

Unique in a variety of ways, Studies in the Pauline Epistles: Essays in Honor of Douglas Moo is a must have for any serious, Pauline scholar or student. The contributors to this Festschrift have all had a long relationship with Doug Moo. Some of them are former students and others are professional colleagues who have served with him in various capacities.

"It goes without saying that Doug Moo and I have not always agreed. But his patient attention to the text, especially when it does not seem to agree with our church traditions, is a shining example of what exegesis means. That, I believe, is the ideal in which he and I are bound in ties of fellowship transcending verbal disputes."

Doug is a top-notch NT scholar, as apparent from his several excellent published commentaries. I believe that he is one of the best commentary writers of the twentieth and twenty-first centuries. His excellent and incisive exegetical thinking is always evident."

"Doug is the essence of a Christian gentleman and scholar. His kindness is demonstrated in how he treats those who disagree with him, for he honors and respects those who differ with him."

▼▲
I'm the author/artist and I want to review Studies in the Pauline Epistles: Essays in Honor of Douglas J. Moo.
Back
Back