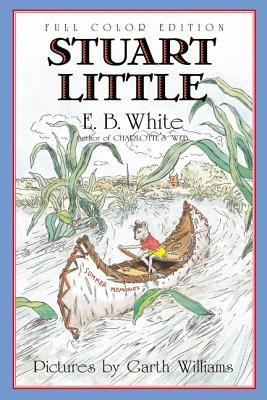 The classic story by E. B. White, author of Charlotte's Web and Trumpet of the Swan, about one small mouse on a very big adventure! This edition features the classic art in full color.

Stuart Little is no ordinary mouse. Born to a family of humans, he lives in New York City with his parents, his older brother George, and Snowbell the cat. Though he's shy and thoughtful, he's also a true lover of adventure.

Stuart's greatest adventure comes when his best friend, a beautiful little bird named Margalo, disappears from her nest. Determined to track her down, Stuart ventures away from home for the very first time in his life. He finds adventure aplenty. But will he find his friend?

Rosemary Wells is the creator of many unforgettable children's book characters, including Max and Ruby, McDuff, and Yoko, each of whom stars in their own book series. She is also the author of perennial favorites about universal childhood experiences, such as Noisy Nora and Read To Your Bunny. Rosemary Wells lives in upstate New York.

▼▲
I'm the author/artist and I want to review Stuart Little 60th Anniversary Edition (Full Color).
Back