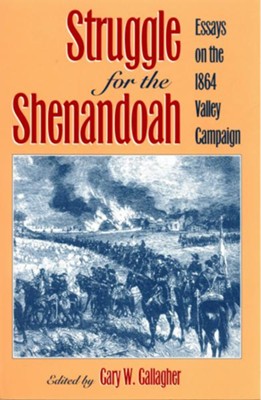 Struggle for the Shenandoah - eBook

Few geographical regions played a more critical role in the American Civil War than the Shenandoah Valley of Virginia. At no time did the Valley loom larger on the military landscape than in the late summer and fall of 1864, when the armies of Jubal A. Early and Philip H. Sheridan waged their bitter struggle. The military and political stakes were immense. War on civilians first became policy on a theater-wide scale, and tactical operations ranged from guerrilla activity to the grand encounter at Cedar Creek. Without an appreciation of why the Shenandoah Valley became first a battleground and then a wasteland, it is impossible to understand fully the last year of the war.

These essays seek to illuminate various facets of the 1864 Valley campaign. The authors question the relative importance of operations in the Shenandoah, the respective performances of Early and Sheridan, and the roles of Confederate guerrillas and cavalry. Often departing from conventional views and sometimes disagreeing with one another, the essays should spark further debate on one of the more important an dramatic military events of the conflict.

“These five essays are of uniformly high quality and exceptional unity. The authors sometimes disagree with one another on the relative importance of certain operations or leaders in the valley, but all agree that the events in the region were significant in the crucial last half of 1864.”—Historian

▼▲
I'm the author/artist and I want to review Struggle for the Shenandoah - eBook.
Back
×
Back
×