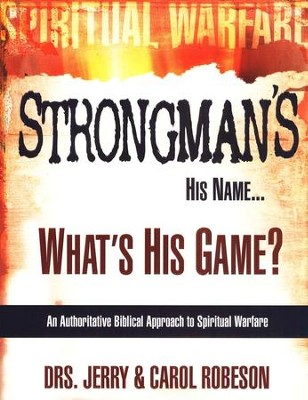 Strongman's His Name . . . What's His Game? An Authoritative Biblical Approach to Spiritual Warfare

▼▲
Don't just treat the "symptoms" of evil---get at the spiritual root! The Robesons reveal 16 demons mentioned by name in Scripture; how to bind them by identifying their "fruit"; and how to cast them out according to Matthew 18:18. Be freed from Satan's shackles and reach the world for Christ! 179 pages, 8.5" x 11" softcover from Whitaker.

▼▲
How to Wage Spiritual Warfare in the Last Days
An important spiritual law was revealed by Jesus in Luke 11:21–22 and Matthew 12:29, "How can one enter into a strongman’s house, and spoil his goods, except he first bind the strongman? And then he will spoil his house."
Now, instead of "binding" symptoms, we can attack the sixteen strongmen or demonic spirits mentioned by name in the Bible! If God names them, they are real, and He has given us dominion over them through the Name of Jesus!
In easy to understand language this book&hellip; Strongman's His Name...What's His Game offers a scriptural, balanced, and uplifting approach to present-day spiritual warfare.

▼▲
Dr. Jerry Robeson (1938–1999) and his wife, Dr. Carol Robeson (1939–2016), were missionaries to Latin America for twenty years. They ministered in Nicaragua, Costa Rica, Paraguay, Jamaica, Mexico, and Chile. They specialized in open-air crusades that were held every night in an area of the city where a new church was needed. One crusade church in Costa Rica, for example, had more than ten thousand people in attendance.
The Robesons maintained an active television and radio ministry. They produced and directed more than twelve hundred Christian television programs in Latin America and the United States, and many hundreds of radio broadcasts. They also appeared as guests on television programs all over the United States. They coauthored Strongman’s His Name, What’s His Game? and Strongman’s His Name&hellip;II.
Jerry and Carol graduated from Northwest College in Kirkland, Washington, and Vision International University in San Diego, California, where they each earned a Ph.D. in Theology in 1996. They had two daughters.
Until 1999, the Robesons were both very active in teaching seminars in the United States and Latin America. After Jerry went to the Lord, Carol continued on with their ministry of seminars and retreats.

▼▲
I'm the author/artist and I want to review Strongman's His Name . . . What's His Game? An Authoritative Biblical Approach to Spiritual Warfare.
Back
Back