SHIPPING DELAYS & COVID-19 IMPACT - learn more
World War 2: The Rest of the Story and How It Affects You Today: An Uncle Eric Book, Revised Edition
By: Richard J. Maybury
Stock No: WW617436 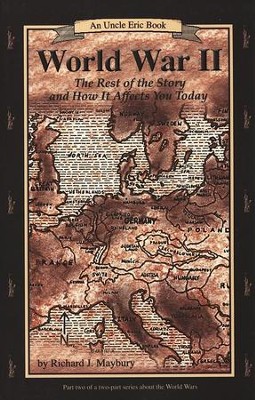 World War 2: The Rest of the Story and How It Affects You Today: An Uncle Eric Book, Revised Edition

▼▲
Gain a complete understanding of the players involved in World War II; stepping far away from the glory-filled praises of the Allies during World War II, "Uncle Eric" recounts the atrocities committed by Stalin (who killed twice as many people as Hitler), the British (who hunted Aborigines in Australia and set up concentration camps in S. Africa), and Americans (against Native Americans). Exposure of "Anglo-Saxonism", and Hitler's death tolls of Jews, minorities, and other political dissenters provide a wide-angle view of the Old World Conflict that began after a complex mix of the effects of the Treaty of Versailles and a long history of European conquests. Offering a different perspective on American involvement, World War II presents evidence that Roosevelt deliberately provoked the Pearl Harbor attack, that Hitler was already finished when America went to war, and other reasons why American neutrality should never have been abandoned. 349 indexed pages, softcover.

▼▲
I'm the author/artist and I want to review World War 2: The Rest of the Story and How It Affects You Today: An Uncle Eric Book, Revised Edition.
Back
×
Back
×