Skip to main content
NEW CYBER DEALS Save up to 90% thru 12/12  shop now >
We've Been There: True Stories, Surprising Insights, and Aha Moments for Adopted Teens
By: Susan TeBos
Stock No: WW5447310 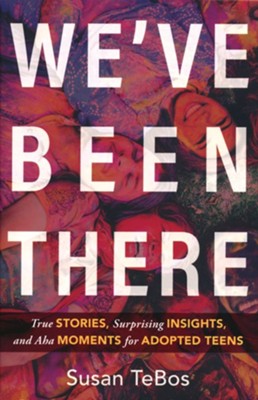 We've Been There: True Stories, Surprising Insights, and Aha Moments for Adopted Teens

▼▲
We've Been There: True Stories, Surprising Insights, and Aha Moments for Adopted Teens by Susan TeBos, Being a teen is a time for self-discovery, which can be extremely difficult for everyone, but especially adopted teens. Many don't have the words for their feelings, or for believing in themselves. Their experience is often different from other teens, and they don't have anyone to help them through their struggles.

Written by an adoption advocate, Susan TeBos, watched her children go through these struggles. This book shares the voices of over thirty adopted teens and young adults, sharing their stories and a front row seat to people with similar stories and feelings. Paperback, 240 pages. Ages 13 years and older.

▼▲
Candid, unfiltered stories about how it feels to be a teen adoptee

The teen years are full of uncomfortable self-discovery for everyone. But adopted teens grapple with issues that make the coming of age journey immensely more difficult. Many don't have words for what they're feeling, sensing, or believing about themselves. They often don't have anyone like them to help them work through their struggles. Forced to cope on their own, they end up feeling isolated.

Adoption advocate and adoptive mom Susan TeBos has watched her own children go through these struggles. Often she wished for a voice that would resonate with adopted teens--her own and others--and authentically meet them where they are.

She found not one voice, but many: over thirty adopted teens and young adults. We've Been There gathers their stories, giving readers a front row seat to people with similar stories and feelings.

This book is an unprecedented glimpse into the unfiltered feelings, thoughts, experiences, and unanswered questions that well up in the heart of every person with adoption in their story. From people who have been there as adopted kids, this book not only invites adopted teens to bring their concerns into the open, but also helps them process how they feel and offers them hope on the other side. In these pages, teen adoptees will understand themselves in a whole new way and find reassurance and a sense of belonging as part of a global adopted community.

▼▲
I'm the author/artist and I want to review We've Been There: True Stories, Surprising Insights, and Aha Moments for Adopted Teens.
Back
Back