Skip to main content
Stories of Faith and Courage from the Revolutionary War: Battlefields & Blessings
By: Jane Hampton Cook
Stock No: WW570426 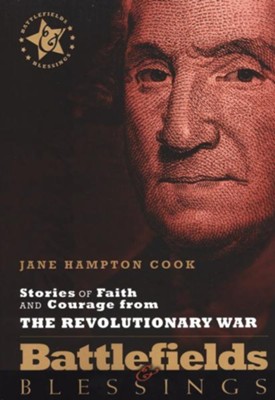 Stories of Faith and Courage from the Revolutionary War: Battlefields & Blessings

▼▲
Consider how God "shed his grace" on the birth of our nation! Featuring inspiring accounts from America's Revolutionary War, this unique devotional highlights the lives of patriots who looked heavenward during the time of conflict. Through Revolution-era letters, diaries, and sermons, plus a Scripture verse and brief prayer, each day's selection explores a timeless theme such as loneliness, contentment, fear, and God's will.

▼▲
• The book features 365 devotionals, one for each day of the year. • Each devotional features a 400-450-word story, a relevant scripture, and an application-oriented sentence prayer. • Each week highlights five stories that chronicle the Revolutionary War, followed by two weekend features called Weekend Reflection and Sabbath Rest. Weekend Reflection takes a modern-day twist on a topic, such as contentment and life purpose, presented in the preceding stories. Sabbath Rest highlights a sermon from the Revolutionary era. These 52 meaty messages show how scripture is as alive today as it was during America’s founding. These sermons also reveal the spiritual struggle facing the patriots as they decided to pursue independence, take up arms, and overthrow their government. • The devotionals come alive through the viewpoints of the Revolution’s key players, such as George Washington, King George III, Samuel Adams, John Adams, Thomas Jefferson, Abigail Adams, Martha Washington, Nathanael Greene, Henry Knox, and Benjamin Franklin. Excerpts from their original manuscripts, letters, and speeches give the book authenticity and accuracy. Unlike many books with historical subjects, this devotional incorporates faith as an important element in the decisions and emotions of these heroes and heroines. It will also show the life purpose of the patriots. • The themes presented in the book transcend generations, making the book relevant to modern day readers who also struggle with topics such as loneliness, contentment, purpose, fear, safety, God’s will, jealousy, rivalry, cooperation, and disappointment. • Because the stories chronicle America’s Revolutionary War and cover more than two decades, the book does not correspond to seasons and holidays. As a result, readers may begin the book any time during the year. The stories may be so captivating for some readers that they may read the book from "cover to cover." • As readers consider the meaning of the American Revolution, they may also experience a revolution in their own hearts, one devotional at a time.

▼▲
I'm the author/artist and I want to review Stories of Faith and Courage from the Revolutionary War: Battlefields & Blessings.
Back