Skip to main content
SPRING CYBER EVENT STARTS NOW: And it's a really BIG deal! Up to 88% off through 5/24>
Stories of Faith and Courage from Firefighters & First Responders - eBook
By: Gaius Reynolds, Sue Reynolds
Stock No: WW18247EB 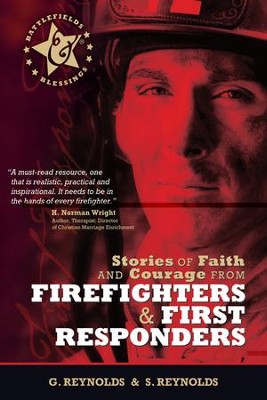 Stories of Faith and Courage from Firefighters & First Responders - eBook

Stories of Faith and Courage From Firefighters and First Responders is a 365-day devotional book in the Battlefields and Blessings® series. With many stories from first responders who have "been there," this book serves as a daily reminder that God is with you in even the most tragic calls. When armed with God’s protective shield and grounded in His word and prayer, you are never alone, because God is with you.

Christian first responders never arrive on scene alone. They have the Lord with them. This devotional collection, written by first responders, provides daily food for thought and prayers direct from their hearts. It is based on God's authoritative, never-changing Word and promises. The devotions relate on-scene and life experiences from those who give selflessly of themselves on a daily basis and have personally witnessed and felt God's hand in times of loss and tragedy, as well as during humorous and daily monotonous routine situations.

Some days you will weep as you identify with the authentic tragedy shared. At other times you'll laugh at situations that only other first responders can truly identify with. Each day you will learn how God can be your refuge and fortress on each and every call.

▼▲
In 1995, Chaplain Gaius (Gay) and his wife, Sue, accepted the position of missionaries for the Fellowship of Christian Firefighters, International. Sue serves as newsletter editor, and Gay serves as president.
In 1994 they moved to Colorado from California where Gay had obtained his MBA and owned his own business. After teaching in the California public education system (elementary through college), Sue used her master’s degree in education in her career as Director of Children’s Ministries at Calvary Bible Church.
After moving to Colorado, Gay became a firefighter for the Livermore Fire Protection District. Meanwhile, Sue wrote and co-authored several books and worked with Biblica (then IBS) to compile Answering The Call, a pocket New Testament for first responders.

▼▲
I'm the author/artist and I want to review Stories of Faith and Courage from Firefighters & First Responders - eBook.
Back
Back