Skip to main content
Stories Behind the Greatest Hits of Christmas - eBook
By: Ace Collins
Stock No: WW3486EB 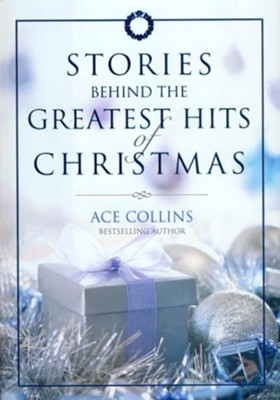 Stories Behind the Greatest Hits of Christmas - eBook

▼▲
Much like The Stories Behind The Best-Loved Songs Of Christmas, The Stories Behind The Great Traditions of Christmas and More Stories Behind The Best Loved Songs of Christmas this new Collins Christmas book will fill a void in the book world. With a look at these secular classics, people who love the music of the season will finally have a source that gives the stories behind the creation of these wonderful songs, the way they found their way into the hands of those who made them famous and the reason they climb the charts. The Stories Behind the Greatest Hits of Christmas is really a guide or a map that connects Christmas past with Christmas present. It will be a time machine that connect the past to the present and makes the experience of hearing Christmas classics even more special. Completed with thoughts of those who penned these classics, along with the artists, such as Brenda Lee, who made them famous, this will be a book that is sure to generate fan interest.

Ace Collins is the writer of more than sixty books, including several bestsellers: Stories behind the Best-Loved Songs of Christmas, Stories behind the Great Traditions of Christmas, The Cathedrals, and Lassie: A Dog’s Life. Based in Arkadelphia, Arkansas, He continues to publish several new titles each year, including a series of novels, the first of which is Farraday Road. Ace has appeared on scores of television shows, including CBS This Morning, NBC Nightly News, CNN, Good Morning America, MSNBC, and Entertainment Tonight.

▼▲
Ace Collins is the writer of more than sixty books, including several bestsellers: Stories Behind the Best-Loved Songs of Christmas, Stories Behind the Great Traditions of Christmas, The Cathedrals, and Lassie: A Dog's Life. Based in Arkadelphia, Arkansas, he continues to publish several new titles each year, including a series of novels, the first of which is Farraday Road. Ace has appeared on scores of television shows, including CBS This Morning, NBC Nightly News, CNN, Good Morning America, MSNBC, and Entertainment Tonight.

▼▲
Ace Collins is almost a household name. His many books have sold tens of thousands of copies and have become treasured family classics--read and enjoyed by young and old alike.

In his latest book, Collins reveals the stories behind the greatest hits of Christmas, all the songs your readers know by heart and have welcomed into their lives and families for generations. But how many know who wrote them, any why?

For example, everyone knows, "The Christmas Song" (sometimes called "Chestnuts Roasting On an Open Fire". But how many know that jazz great Mel Torme wrote the song after visiting a friend in California, and seeing what his friend had written on a spiral pad: "Chestnuts roasting...Jack Frost nipping...Yuletide carols..." Nat King Cole recorded it in 1946. The rest is history.

Readers of Collins new book will discover the origins of such famous Christmas songs as "Have Yourself a Merry Little Christmas," "Winter Wonderland," "White Christmas," "Little Drummer Boy," "Feliz Navidad," "O Holy Night," and two dozen others. It'll be a "hit" with readers everywhere.

▼▲
What is so much fun about Stories Behind the Greatest Hits of Christmas by Ace Collins is that it is filled with wild and wacky tidbits of trivia. Did you know that a man in France with the Christmas name of Noel married a woman in America with the Christmas name of Gloria, even though he couldn't speak English and she couldn't speak French, and all they had in common was a love of music? It's true, and this duo later composed the blockbuster Christmas carol, "Do You Hear What I Hear?" Were you aware that every December when you hear Brenda Lee singing, "Rockin' Around the Christmas Tree" that she recorded that when she was only 13 years old? The song was a total bomb when released, selling only 5,000 copies. Yet, two years later, after Brenda Lee had become a superstar, the song was re-released as though it was a brand new record and it became a smash hit. Were you aware that an advertising exec with Montgomery Ward's came up with the story of "Rudolph the Red-Nosed Reindeer" and sold all rights to the story to Montgomery Ward's stores for only $300. The company subsequently printed six million small storybooks about Rudolph and gave them away for years to their customers. Finally, when an offer came through for the story to become an actual children's picture book, the company graciously returned ownership rights to the original author. However, that man's brother-in-law turned it into the hit song that was recorded by Gene Autry, and gave only 5% of the song royalties to the original author.

So it is with every chapter in this book. And the greatest surprise of all is that the majority of these Christmas standards were one-hit-wonders by their lyricists and composers. In fact, many times it was a total fluke or some fool luck that even led to the songs being discovered and recorded.

Some of the stories are ironic, even startling. Hugh Martin and Ralph Blane were the top songwriters in Hollywood and Broadway in the 1940s, writing hits for Dinah Shore, Frank Sinatra, Lena Horne, and Ethel Merman. Yet, when they sent their song "Have Yourself a Merry Little Christmas" to an upstart teenager named Judy Garland, she sent it back and demanded that they change part of the lyrics. The original version said, "Have yourself a merry little Christmas, it may be your last. Next year we'll be living in the past." Garland thought that servicemen hearing this song would become greatly depressed, so she refused to sing those lyrics. The songwriters bowed to her demands and rewrote the lines to say, "Have yourself a merry little Christmas, let your heart be light. From now on our sorrows will be out of sight." Garland loved the change, used the song in her next movie, "Meet Me in St. Louis," and the song became an instant holiday classic.

If you want to know how "The Chipmunk Song" was created, how Elvis turned "Blue Christmas" into a rock and roll phenomenal hit, how "The Christmas Song" had to be sneaked into the recording studio by Nat King Cole so that the white singers wouldn't discover it first, or how "Silver Bells" created a howling response from one composer's wife when she heard the original version called "Tinkle Bells," then get this book and start having fun. My wife and I read the whole book aloud to each other because it was so much fun to hear the stories with someone else. In fact, we've already made up our minds that we're going to read it again next Christmas.  Dr. Dennis E. Hensley, www.ChristianBookPreviews.com

▼▲
I'm the author/artist and I want to review Stories Behind the Greatest Hits of Christmas - eBook.
Back
Back