Skip to main content
Stopping By Woods on a Snowy Evening
By: Robert Frost
Stock No: WW467342 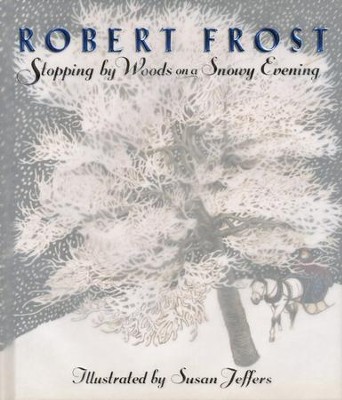 Stopping By Woods on a Snowy Evening

▼▲
Illustrations by Susan Jeffers perfectly portray the stanzas in Robert Frost's classic poem Stopping by Woods on a Snowy Evening. White woods, towns, and snowflakes play up the warmth of colors on the man's plaid jacket and sleigh blanket. A perfect way to snuggle up a cold night, and introduce young children to the beauty of Frost's poetry! Hardcover with frosted-translucent dust jacket. Approximately 8.75" x 7.25".

▼▲
Ever since it was published in 1978, the picture-book presentation of Robert Frost's poem "Stopping by Woods on a Snowy Evening" has been an enduring favorite. For this special edition with a new design, trim size, and three new spreads, Susan Jeffers has added more detail and subtle color to her sweeping backgrounds of frosty New England scenes. There are more animals to find among the trees, and the kindly figure with his "promises to keep" exudes warmth as he stops to appreciate the quiet delights of winter. The handsome new vellum jacket will attract new and old fans as it evokes a frost-covered windowpane. This celebration of a season makes an ideal holiday gift for a child, a teacher, or a host.

Robert Frost (1874-1963) is one of America's most celebrated poets and a four-time winner of the Pulitzer Prize.

▼▲
Robert Lee Frost was born in San Francisco in 1874. When he was ten, his father died and he and his mother moved to New England. He attended school at Dartmouth and Harvard, worked in a mill, taught, and took up farming, before he moved to England, where his first books of poetry, A Boy’s Will (1913) and North of Boston (1914), were published. North of Boston brought him recognition as the preeminent voice of New England and as one of America’s major poets. In 1915 he returned to the United States and settled on a farm in New Hampshire. Four volumes of his poetry, New Hampshire (1923), Collected Poems (1930), A Further Range (1936), and A Witness Tree (1942) were all awarded the Pulitzer Prize. He died in 1963.
Susan Jeffers is the illustrator of such distinguished picture books as Three Jovial Huntsmen, a Caldecott Honor book; Rachel Field's Hitty; and the ABBY Award-winning Brother Eagle, Sister Sky, which was also a New York Times besteller. She lives in New York.

▼▲
I'm the author/artist and I want to review Stopping By Woods on a Snowy Evening.
Back
Back