Skip to main content
CYBER WEEK HOURS LEFT! Spot great deals up to 88% off. >
Stones for Bread
By: Christa Parrish
Stock No: WW689010 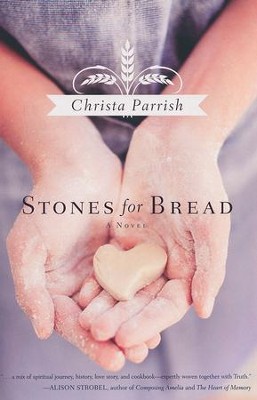 ▼▲
Liesl is an artisan bread maker and her restaurant, Wild Rise is not only a popular bakehouse and cafi in Vermont, it's an extension of herself like her mother and grandmother before her. Even though she lost her mother to suicide when she was eleven, she keeps this maternal bond alive as she bakes.

Liesl prides herself on living an uncomplicated, unattached life. But that changes when Seamus walks through the door of Wild Rise, lugging the large bags of whole wheat flour from the local food co-op. He and his daughter Cecelia have recently moved to the country seeking simplicity. Despite her best effort, Liesl becomes attracted to this teddy bear of a man who laughs easily and eats strange sandwich concoctions-on her bread, much to her dismay.

Her simple life is further complicated when a popular cooking show features her bakery. The publicity increases her business and brings several offers from larger businesses, all of which she turns down. But it also brings a completely unexpected phone call, one from a woman claiming to be her half-sister. Liesl's sense of identity dissolves as everything about her relationship with her mother-and the bread that held them together-comes into question. Has she been given stones rather than bread? And how can she ever take these crumbs and make them whole again?

A solitary artisan. A legacy of bread-baking. And one secret that could collapse her entire identity.

Liesl McNamara’s life can be described in one word: bread. From her earliest memory, her mother and grandmother passed down the mystery of baking and the importance of this deceptively simple food. And now, as the owner of Wild Rise bake house, Liesl spends every day up to her elbows in dough, nourishing and perfecting her craft.

But the simple life she has cultivated is becoming quite complicated. Her head baker brings his troubled grandson into the bakeshop as an apprentice. Her waitress submits Liesl’s recipes to a popular cable cooking show. And the man who delivers her flour—a single father with strange culinary habits—seems determined to win Liesl’s affection.

When Wild Rise is featured on television, her quiet existence appears a thing of the past. And then a phone call from a woman claiming to be her half-sister forces Liesl to confront long-hidden secrets in her family’s past. With her precious heritage crumbling around her, the baker must make a choice: allow herself to be buried in detachment and remorse, or take a leap of faith into a new life.

Filled with both spiritual and literal nourishment, Stones for Bread provides a feast for the senses from award-winning author Christa Parrish.

"A quietly beautiful tale about learning how to accept the past and how to let go of the parts that tie you down." —RT Book Reviews, 4.5 stars, TOP PICK!

▼▲
“Parrish’s latest is a quietly beautiful tale about learning how to accept the past and how to let go of the parts that tie you down. Readers can find a great deal to identify with in Liesl’s life, from her tumultuous family background to her reluctance to accept love. All of this is entwined with a meaningful spiritual journey and amazing bread recipes that will appeal to the beginner and satisfy even the most seasoned baker.” -- Romantic Times, 4-1/2 stars, TOP PICK!

“The vitality of close relationships is powerfully depicted in Liesl’s struggle to let go of her past and embrace the future right in front of her. Readers will definitely relate to her struggle of faith and confidence.” -- Booklist

▼▲
I'm the author/artist and I want to review Stones for Bread.
Back
Back