Skip to main content
WINTER BIBLE SALE: Over 1,200 Deals Up to 80% Off, thru 2/1. Shop Now >
No Stone Unturned: Greek Inscriptions and Septuagint Vocabulary
By: James K. Aitken
Stock No: WW063249 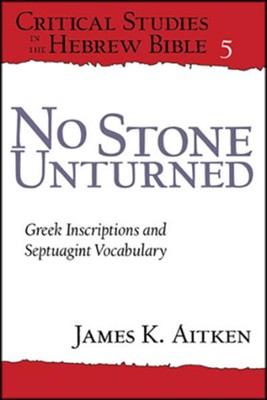 For understanding biblical Greek in context, the importance of the discoveries of papyri was recognized early in the twentieth century, while inscriptions by comparison were left unexplored. Those scholars who had intended to turn their attention to the inscriptions were delayed by their work on the papyri and by the conviction that the greater results would come from these. As a result, undue focus has been placed on papyri, and biblical Greek words have been viewed only through their lens, leading to the inference that the Greek is specifically Egyptian and vernacular. This volume widens the focus on Septuagint words by demonstrating how the inscriptions, coming from a broader geographical region than papyri and containing a wider range of registers, are a source that should not remain untouched.

This work explains the current state of the study of Septuagint vocabulary and outlines the competing roles of papyri and inscriptions in its interpretation, including the limitations of focussing solely on papyri. The practical issues for a biblical scholar in dealing with inscriptions are presented and some guidance is given for those wishing to explore the resources further. Finally, examples are drawn together of how inscriptions can illuminate our understanding of Septuagint vocabulary, and thereby inform the socio-historical position of the Septuagint. The origins of apparently new words in the Septuagint, the semantic and grammatical function of words, and the geographical distribution and register all demonstrate the need for further investigation into this field.

▼▲
I'm the author/artist and I want to review No Stone Unturned: Greek Inscriptions and Septuagint Vocabulary.
Back