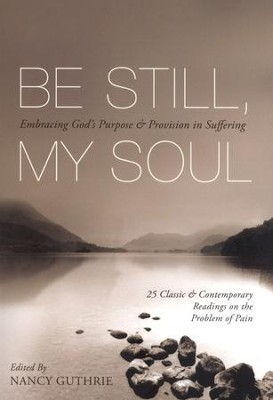 Be Still My Soul: Embracing God's Purpose & Provision in Suffering

▼▲
When you experience suffering and loss, it's natural to cry out, "Why is this happening? Where are you, God?" Offering profound insights from an array of classic and contemporary theologians, teachers, and missionaries, these comforting readings open your eyes to God's purpose and provision---even in the midst of pain and tragedy. 192 pages, softcover from Crossway.

This exceptional collection of twenty-five short readings drawn from classic and contemporary theologians, Bible teachers, and missionaries will encourage anyone going through a period of suffering.

J. I. Packer (1926–2020) served as the Board of Governors’ Professor of Theology at Regent College. He authored numerous books, including the classic best seller Knowing God. Packer served as general editor for the English Standard Version Bible and as theological editor for the ESV Study Bible.

Jerry Bridges (1929–2016) served for over sixty years on the staff of the Navigators. He authored fifteen books and five devotionals, including The Pursuit of Holiness, which has sold over a million copies.

Sinclair B. Ferguson (PhD, University of Aberdeen) is Chancellor’s Professor of Systematic Theology at Reformed Theological Seminary and the former senior minister of the First Presbyterian Church in Columbia, South Carolina. He is the author of several books, the most recent being By Grace Alone: How the Grace of God Amazes Me. Sinclair and his wife, Dorothy, have four grown children.

PHILIP YANCEY is editor at large of Christianity Today and cochair of the editorial board for Books and Culture. Some of his books include Rumors of Another World (2003), Reaching for the Invisible God (2000), The Bible Jesus Read (1999), What's So Amazing About Grace? (1998), The Jesus I Never Knew (1995), and Where is God When It Hurts (1990).

Os Guinness (DPhil, University of Oxford) is an author and social critic. He is currently a senior fellow at the Oxford Centre for Christian Apologetics in Oxford and has written or edited more than thirty books. Os has spoken at dozens of the world’s major universities and political and business conferences on many issues, including religious freedom. He lives with his wife, Jenny, near Washington, DC.

THOMAS MANTON (1620–1677) played a prominent role in the Savoy Conference and the drafting of the Westminster Confession. He was pastor of a noted Puritan congregation in London but was later ejected from the official church for nonconformity, though he continued to preach wherever and whenever he had opportunity. Archbishop Ussher called him "one of the great preachers in England." His sermons formed the basis of his published commentaries.

▼▲
I'm the author/artist and I want to review Be Still My Soul: Embracing God's Purpose & Provision in Suffering.
Back
×
Back
×