EARLY CHRISTMAS SALE: Shop over 900 items up to 85% off through 9/29 >
7 Steps to Knowing and Doing the Will of God: For Teens
By: Tom Blackaby, Mike Blackaby, Daniel Blackaby 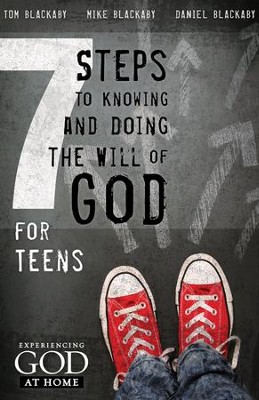 7 Steps to Knowing and Doing the Will of God: For Teens

▼▲
Encourage your teens to follow God at a pivotal time in their lives with this book based on the Experiencing God teachings of Henry Blackaby. Seven Steps to Knowing and Doing the Will of God for Teens provides teens with relevant spiritual direction as they move toward adulthood. Using cartoon illustrations, jokes, and real-life stories, Tom, Mike, and Daniel Blackaby bring a strong focus to a message that teens need.

▼▲
More teenagers than ever before seem to be spinning their wheels a long time before gaining any traction in life. Based on the world-renowned Experiencing God teachings of Henry Blackaby, Seven Steps to Knowing and Doing the Will of God for Teens provides students with relevant spiritual direction as they move toward adulthood.
Throughout, authors Tom, Mike, and Daniel Blackaby (Henry Blackaby's son and grandsons) utilize fun formatting with cartoon illustrations, jokes, real-life stories, and graphically engaging treatments to bring strong focus to a message teenagers need in their often random settings.

▼▲
Tom Blackaby is director of International Ministries for Blackaby Ministries International and the former senior pastor of North Sea Baptist Church in Stavanger, Norway. He co-authored The Man God Uses with his father, Henry Blackaby (Experiencing God). Tom and his wife have three children.
Mike Blackaby is a Young Adults pastor at a church in Jonesboro, Georgia. The grandson of Henry Blackaby (Experiencing God), he also co-wrote When Worlds Collide: Stepping Up and Standing Out in an Anti-God Culture.

Daniel Blackaby is a fourth generation author whose books include When Worlds Collide, The Lost City Chronicles, and Legend of the Book Keeper.

▼▲
I'm the author/artist and I want to review 7 Steps to Knowing and Doing the Will of God: For Teens.
Back
×
Back
×