Skip to main content
CYBER WEEK HOURS LEFT! Spot great deals up to 88% off. >
Statesman and Saint: The Principled Politics of William Wilberforce
By: David Vaughan
Stock No: WW822243 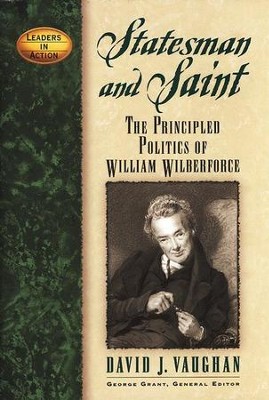 Statesman and Saint: The Principled Politics of William Wilberforce

▼▲
This moving biography of Wilberforce tells the story of his religious conversion in 1784 and his rise to leadership of the Clapham Secta group of evangelicals active in political, philanthropic, and religious causes. Under his leadership, the "Saints," as they were called, championed parliamentary and prison reforms, missionary endeavors, Bible distribution, and a host of other charitable efforts and organizations. These causes included the Church Missionary Society (established in 1799) and the British and foreign Bible Society (founded in 1804).

▼▲
Modern Americans often wonder if it is possible for a politician to remain a strong Christian after being elected to office and subjected to political havoc. The life of William Wilberforce proves it is not only possible, but also very good for the country. Interest catching and capably written, Statesman and Saint presents this biography in a clear-cut, triumphant manner. No punches are pulled, no whitewashing, and all glory given to the Lord. Adding to the interest are Vaughans descriptions of life in England, especially in English politics in the 18th century. The alcoholism, immorality, and extreme self-interest of that era sound very similar to our era. Little tidbits relating to the American colonies add interest, such as Wilberforce belief that the English were waging the revolutionary war in a cruel, bloody and impractical manner (p. 43).
By the year 1784, Wilberforce, then 24, was popular with society and a rising star in the political arena. Then in 1785, the Lord took over Wilberforce' life and thence forward many of the problems in London, pre-eminently the question of the legality of slavery. History buffs will meet many 18th century friends, including John Newton and William Pitt. Part 1 of Statesman and Saint presents Wilberforce life, while Part 2 takes a candid look at his character. Part 3 considers the benefits humanity has reaped from Wilberforce work and Part 4 draws lessons for our Christian growth.
Statesman and Saint is one of the volumes of the Leaders in Action series  just imagine, a whole group of Christian statesmen to encourage us! Statesman and Saint is as interesting as a novel. Well worth reading for enjoyment, this book will also provide devotional material and Christian life lessons. I recommend it for all readers middle school through adult, who are interested in history and/or Christian heroes, or just a good story. This volume will be useful for Christian schools, homeschoolers, and church groups.  Donna Eggett, Christian Book Previews.com

▼▲
I'm the author/artist and I want to review Statesman and Saint: The Principled Politics of William Wilberforce.
Back
Back