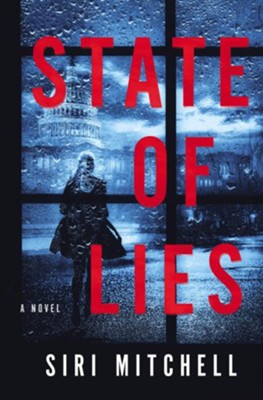 Georgie Brennan may be a world-class quantum-physicist, but she grapples with life as a single mother after her husband is killed. When she receives a message from beyond the grave, it leads her to question the details that surround her husband's untimely death.

Someone wants Georgie Brennan dead. And the more she digs for the truth, the fewer people she can trust.

Months after her husband, Sean, is killed by a hit-and-run driver, physicist Georgie Brennan discovers he lied to her about where he had been going that day. A cryptic notebook, a missing computer, and strange noises under her house soon have her questioning everything she thought she knew.

With her job hanging by a thread, her son struggling to cope with his father’s death, and her four-star general father up for confirmation as the next secretary of defense, Georgie quickly finds herself tangled in a web of political intrigue that has no clear agenda and dozens of likely villains.

Only one thing is clear: someone wants her dead too. And the people closest to her might be the most dangerous of all.

Praise for State of Lies:

"A voice you’ll want to curl up with, and a plot that won’t let you sleep." —Tim Tigner, international bestselling author of Twist and Turn

"Don’t miss this thrilling ride." —Kelly Irvin, author of Over the Line

"Siri Mitchell has created a story that will suck you in and not let go. With twists and turns, international intrigue, and danger galore, this book reads like a psychological thriller mixed with healthy doses of suspense." —Cara Putman, author of the Hidden Justice series

Siri Mitchell is the author of 16 novels. She has also written 2 novels under the pseudonym of Iris Anthony. She graduated from the University of Washington with a business degree and has worked in various levels of government. As a military spouse, she lived all over the world, including Paris and Tokyo. Visit her online at sirimitchell.com; Facebook: SiriMitchell; or Twitter: @SiriMitchell.

▼▲
'Fans of Terri Blackstock will love this fast-paced tale with a surprising, disconcerting finale.' -- Publishers Weekly

'State of Lies gripped my attention from the start and didn't let it go till the very end. Mitchell does a marvelous job of creating and maintaining an atmosphere seething with peril and perplexity.' -- All About Romance

▼▲
I'm the author/artist and I want to review State of Lies.
Back