Skip to main content
CYBER WEEK ENDS SOON! Spot great deals up to 88% off. >
It Starts at Home: A Practical Guide to Nurturing Lifelong Faith
By: Kurt Bruner, Steve Stroope
Stock No: WW2419583 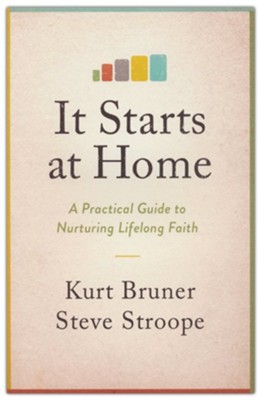 It Starts at Home: A Practical Guide to Nurturing Lifelong Faith

As Your Children Grow, Will Their Faith Grow Too?

As both stories and statistics attest, the number of evangelical children who abandon Christianity in adulthood is staggering. To see effective change, parents cannot leave their child’s faith to chance. Rather, families must start nurturing faith early—you cannot start once your child is grown, you must start at home.

Strengthening family and home life is the best way to encourage your children to maintain a lifelong faith. It Starts at Home upholds marriage and family as the proving ground for lasting success. Experienced pastors Kurt Bruner and Steve Stroope provide a clear purpose, an effective strategy, and a simple plan for anyone who wants to be intentional in their homes. Their insights will help leaders recalibrate their priorities by asking them to evaluate their leadership where it counts most. This newly revised edition evaluates the current trends families and young adults face that can contribute to this crisis. Don’t let your child’s faith fade to memory—learn how you can create a home that will prepare them for lifelong faith.

▼▲
KURT BRUNER hosts DriveFaithHome.com to help churches reach and disciple busy families. He has worked with hundreds of churches as they customize a ministry model pioneered while he served as pastor of spiritual formation at the 20,000 member Lake Pointe Church in Rockwall, Texas. The bestselling author of more than twenty books, Kurt spent twenty years with Focus on the Family where he served as Vice President over films, books, magazines, radio drama, broadcasting, and other media groups including the popular Adventures in Odyssey team.

STEVE STROOPE (B.A., Hardin Simmons University; M.Div., Southwestern Baptist Theological Seminary) served as the Lead Pastor for 40 years at Lake Pointe Church in Rockwall, Texas. He is now the Founding Pastor. Church attendance under his leadership grew from 53 at its inception to over 11,000 today. Steve also provides coaching to partnership churches and missionaries in Africa, Australia, New Zealand, China, Cuba, Russia, Mexico, France, South Africa, and North America. He is a sought-after speaker, both nationally and internationally, and is co-author of Money Matters in the Church. He and his wife, Marsha, have two grown daughters and five grandchildren.

▼▲
I'm the author/artist and I want to review It Starts at Home: A Practical Guide to Nurturing Lifelong Faith.
Back
Back