Skip to main content
THE MEGA CHRISTMAS SALE: Save up to 85% off through 10/19 >
Stand Your Ground: An Introductory Text for Apologetics Students
By: Dean Hardy
Stock No: WW351044 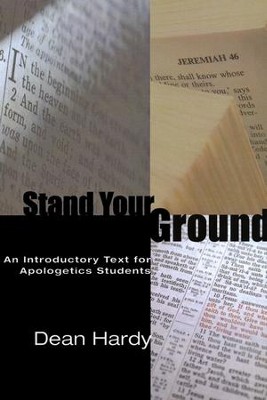 Stand Your Ground: An Introductory Text for Apologetics Students

▼▲
"My freshman year of college was a battle," writes Katie, a college student and a strong Christian.The transition from high school to college is one of the most pivotal times in a young person's life. After departing from under the protective wings of their parents, young adults often have trouble holding firm to the Christian faith.
Stand Your Ground is an introduction to apologetics for young adults in high school or college. The book includes thirteen chapters that confront the overwhelming intellectual attacks Christian college students face on university campuses.Dean Hardy takes readers on a spiritual and intellectual journey, addressing such issues as the nature of truth and reality, the investigation of other worldviews, the evidence for Christianity, critics' arguments against Christianity, and the relationship between apologetics and evangelism.

Tell us a little about yourself.  I am the Bible Department Chair and the teacher of Christian Philosophy and Apologetics at Charlotte Christian School in Charlotte, NC. After graduating from Palm Beach Atlantic University, I worked with Palm Beach County Youth for Christ for three years, became a Christian school teacher, and received a masters in apologetics from Southern Evangelical Seminary while under the tutelage of Norman Geisler. I have spoken at Intervarsity and FCA meetings, the ACSI and GCACS teachers conferences, had an article published in Areopagus Journal, and was featured on Alex McFarland's radio show "Truth Talk Live!" .

What was your motivation behind this project?  Even though I was brought up in a strong Christian home, I questioned my faith during my college years. During this time of questioning, I came to the conclusion that Christianity was the only cohesive and rational religion. When I became a teacher, I realized that there wasn't a cohesive textbook for my apologetics class- so I developed one myself.

What do you hope folks will gain from this project?  I hope that young people will realize that they actual have great, logical reasons to believe in the Christian faith. I also want to make sure that our students have the logical and intellectual tools to be able to stand up against the arguments of current day opponents to the Christian faith.

Who are your influences, sources of inspiration or favorite authors / artists?  I love the writings of C.S. Lewis, G.K. Chesterton, Norman Geisler, Etienne Gilson, and Thomas Aquinas.

Anything else you'd like readers / listeners to know:  I put on a week-long youth apologetics conference every summer in Charlotte, NC entitled "Stand Your Ground: the Youth Apologetics Conference."