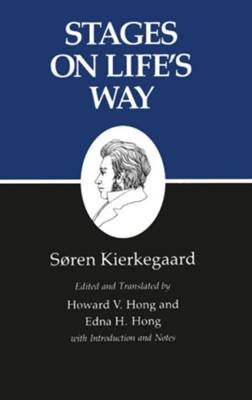 ▼▲
Stages on Life's Way, the sequel to Either/Or, is an intensely poetic example of Kierkegaard's vision of the three stages, or spheres, of existence: the esthetic, the ethical, and the religious. With characteristic love for mystification, he presents the work as a bundle of documents fallen by chance into the hands of "Hilarius Bookbinder," who prepared them for printing. The book begins with a banquet scene patterened on Plato's Symposium. Next is a discourse by "Judge William" in praise of marriage "in answer to objections." The remainder of the volume, almost two-thirds of the whole, is the diary of a young man, discovered by "Frater Taciturnus," who as deeply in love but felt compelled to break his engagement. The work closes with a letter to the reader from Taciturnus on the three "existence-spheres" represented by the three parts of the book.

▼▲
I'm the author/artist and I want to review Stages on Life's Way: Studies by Various Persons (Kierkegaard's Writings).
Back
×
Back
×