Skip to main content
Squirreled Away, #1
By: Mike Nawrocki
Illustrated By: Luke Seguin-Magee
Stock No: WW434985 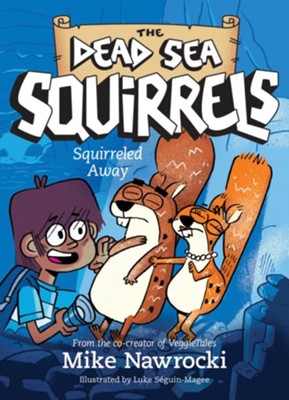 ▼▲
In Squirreled Away by Mike Nawrocki, and illustrated by Luke Seguin-Magee, 10-year-old Michael and his friend Justin sneak into the Dead Sea caves near the archaeological dig where Michael's dad is working. Michael finds two 2,000-year-old squirrels petrified in sea salt. Hijinks ensure as Michael tries to bring them back to the U.S. hidden in his backpack. What Michael thinks are just cool souvenirs may turn out to be something much more!

▼▲
Mike Nawrocki, co-creator of VeggieTales, is back! In the first installment of this hilarious new chapter-book series, ten-year-old Michael and his friend Justin sneak into the Dead Sea caves near the archaeological dig where Michael’s dad is working. Michael finds two 2,000-year-old squirrels petrified in sea salt. Hijinks ensue as Michael tries to bring them back to the U. S., hidden in his backpack. What Michael thinks are just cool souvenirs may turn out to be something much more! The Dead Sea Squirrels series is humorous, fun, and filled with character-building lessons.

▼▲
A humorous early chapter book featuring childish adventures, biblical concepts, and Christian life. This outing is the first in the planned Dead Sea Squirrels series by the co-creator of Veggie Tales. As readers familiar with Veggie Tales might expect, there are elements of character-building and morality, Bible verses, and depictions of Christian life throughout this chapter book for elementary school children. Michael Gomez and his best friend, Justin, spend the summer with Michael’s archaeologist father at a dig on the shores of the Dead Sea, where Michael makes a “gross”—that is to say “cool”— discovery: two salt-withered, ancient squirrel bodies. The theme of the book—the commandment to honor thy father and mother—is illustrated by Michael’s disobedience to his father and his subsequent consequences and remorse. However, there is plenty of humor to tickle young readers, and the target audience will undoubtedly laugh out loud. Séguin-Magee’s many grayscale illustrations are appealingly cartoonish and funny. They depict presumably Latinx Dr. Gomez and Michael with brown skin, while Michael’s mother and Justin both present white. The book ends with a cliffhanger that will make readers happy sequel Boy Meets Squirrels publishes simultaneously. Fans of such characters as Big Nate and Stink will likely enjoy the silly humor and adventures in this series opener, while many of their caregivers will appreciate the character-building lessons. (Fiction. 5-9)

▼▲
I'm the author/artist and I want to review Squirreled Away, #1.
Back
Back