Skip to main content
CYBER WEEK SALE! Spot great deals up to 88% off. >
Squanto and the Miracle of Thanksgiving
By: Eric Metaxas
Stock No: WW320394 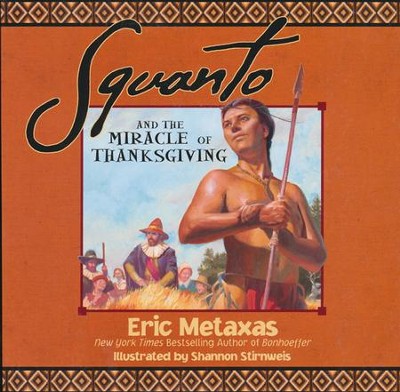 Squanto and the Miracle of Thanksgiving

▼▲
Your 4- to 8-year-olds will be amazed to discover that the real hero of the first Thanksgiving was not English or Indian---but God. The remarkable story of how he brings together the struggling Pilgrims and a lonely brave who knows their language and shares their faith is a true American history miracle.

Experience the true story from American history about the spiritual roots and historical beginnings of Thanksgiving.

This entertaining and historical story shows that the actual hero of Thanksgiving was neither white nor Indian but God. In 1608, English traders came to Massachusetts and captured a twelve-year-old Indian, Squanto, and sold him into slavery. He was raised by Christians and taught faith in God. Ten years later he was sent home to America. Upon arrival, he learned an epidemic had wiped out his entire village. But God had plans for Squanto. God delivered a Thanksgiving miracle: an English-speaking Indian living in the exact place where the Pilgrims landed in a strange new world.

Eric Metaxas is the #1 New York Times bestselling author of Bonhoeffer, Martin Luther, If You Can Keep It, Miracles, Seven Women, Seven Men, and Amazing Grace. His books have been translated into more than twenty-five languages. His writing has appeared in the Wall Street Journal, the New York Times, and the New Yorker, and Metaxas has appeared as a cultural commentator on CNN, Fox News, and MSNBC. He is the host of The Eric Metaxas Radio Show, a daily nationally syndicated show aired in 120 U.S. cities and on TBN. Metaxas is also the founder of Socrates in the City, the acclaimed series of conversations on "life, God, and other small topics," featuring Malcolm Gladwell, Ambassador Caroline Kennedy, Baroness Caroline Cox, and Dick Cavett, among many others. He is a senior fellow and lecturer at large at the King’s College in Manhattan, where he lives with his wife and daughter.

▼▲
I'm the author/artist and I want to review Squanto and the Miracle of Thanksgiving.
Back
Back