Skip to main content
SPRING CYBER EVENT STARTS NOW: And it's a really BIG deal! Up to 88% off through 5/24>
A Spoonful of Grace: Mealtime Blessings in Bite-Sized Pieces
By: Annette Hubbell
Stock No: WW860668 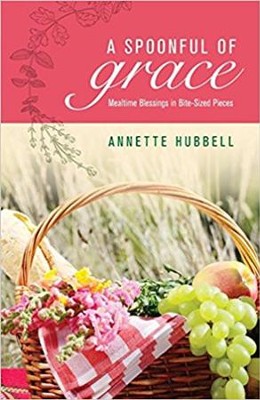 A Spoonful of Grace: Mealtime Blessings in Bite-Sized Pieces

ABOUT TWO MINUTES! That's how long it takes to read each of these mealtime reflections. A Spoonful of Grace is a collection of 366 thought-provoking, gratitude-building, supercharged daily graces. Each prayer is accompanied by its inspired Scripture and followed by a conversation starter-impactful yet brief enough to hold the attention of hungry kids. As part of a well-balanced diet of conversations with God, A Spoonful of Grace:

Tell us a little about yourself.  In 2007 I retired from the water management business (being a General Manager of a water district) and begin writing, acting, and studying. Having an MBA, I thought my school days were over! However, my writing endeavors required a more in-depth knowledge of the Bible, so I earned a certificate in Apologetics from Biola University. My acting led me to form a small production company which features 3 plays, two of which I wrote. I star in all three of them! Witness to Gettysburg is the most popular, having performed it about 200 times, with "Tea with Mrs. Roosevelt" following. I also produced "Witness" as a docudrama (edited by 33-time Emmy Award winner Robert Gardner). San Diego, California is my home.

What was your motivation behind this project?  At a casual lunch with some friends, our host led us in grace. That was it! Saying grace has always been part of my life, but this time something was different. It was an astonishing thought, too, because writing a book was the furthest thing from my mind, and I surely was not a faith scholar. The grace I said growing up was different from the one my friend said. Well, I thought, there must be others Id never heard before. What if I were to collect themfrom all over the worldand create a book? I could even enhance each prayer with a Bible verse. In effect, I would simply become a compiler. I sent out inquiries, asking everyone to share, eagerly awaiting the replies. What a diversity of prayers there would befrom the world over! What I received back surprised me. It seems that there are, in fact, only a handful of standard graces; most are impromptu, made up according to how the day unfolds. Even more surprising were the responses of those who didnt regularly say grace but wished they didand would if they had some structure. I set about writing, but publishers soon told me that there had to be an application. Back to the drawing board to add what came to be Grace Notesshort commentaries on each Scripture, making it applicable to todays family. (I also felt that readers would appreciate exposure to different versions of the Bible, rather than to just one, which is the usual standard among devotionals.) I needed a much bigger education to pull off all that, so I studied hard, earned a certificate in Apologetics from Biola University, immersed myself in Bible studies, and traveled throughout the Holy Lands. Ten years of work and prayer laterand a lot of relying on GodA Spoonful of Grace is the result. If I had known early on what a formidable project this was going to become, Im sure I would never have begun, passing it off instead as merely a wistful dream. But God has a way of giving us just what we can handle. Im glad he did

What do you hope folks will gain from this project?  A Spoonful of Grace is a collection of 366 mealtime graces inspired by all 66 books of the Bible. They are designed to provide meaningful exposure to prayer and to the Bible at a most opportune time: the family meal. They are unique, too, in that each one is inspired by its companion Bible verse(s) and enhanced by the Grace Notes, and all of this is designed to take less than two minutes. Quotations and ideas in the Grace Notes further illustrate the theme of the verse, and/or answer questions generated by the Scripture reading, all for the purpose of promoting lively faith conversations. Each days kid-friendly grace is meant to be read aloud by all family members and is short enough to keep the attention of hungry kids. Dont worrythe food will never get cold!

Anything else you'd like readers / listeners to know:  I believe it is vital that families carve out intentional family time. We are fast becoming a society that communicates more through electronic devices than through the spoken word. Twitter- or texting-sized attention spans and social media interactions dont lend themselves to developing minds or bonding opportunities, and family time (sans electronic devices) becomes more important than ever. I also believe that there is (at least) one thing that kids should see their parents doing every day: praying! What better way to develop a deeper relationship with God and to strengthen family ties than to eat and pray together? With A Spoonful of Grace families have an opportunity to pray together, to say meaningful things to each other, and to get to know one another. When I tested A Spoonful of Grace with some families, one response was, These prayers consume the entire conversation during dinner. Another family told me that their 15-year-old appreciates his family more by spending this quality time together. My aim was to keep these graces and devotionals witty and to the point in order to captureand then holda young persons interest. I hope this book will help turn mealtimes into fun- and faith-filled conversations about issues that countlike sharing, honesty, friendship, respectand, of course, God.