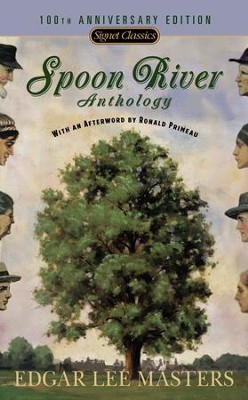 ▼▲
In 1915, Edgar Lee Masters published a book of dramatic monologues written in free verse about a fictional town called Spoon River, based on the Midwestern towns where he grew up. The shocking scandals and secret tragedies of Spoon River were immediately recognized by readers as authentic. Masters raises the dead “sleeping on the hill” in their village cemetery to tell the truth about their lives, and their testimony topples the American myth of the moral superiority of small-town life. Spoon River, as undeniably corrupt and cruel as the big city, is home to murderers, drunkards, crooked bankers, lechers, bitter wives, abusive husbands, failed dreamers, and a few good souls. The freshness of this masterpiece undiminished, Spoon River Anthology remains a landmark of American literature.

▼▲
As a young man, Edgar Lee Masters (1869–1950) rebelled against what he believed to be the hypocrisy of small-town life and went to Chicago, where he practiced law for thirty years. He published eleven books of verses, plays, and essays before beginning his masterpiece, Spoon River Anthology (1915). Later, Masters, Carl Sandburg, and Vachel Lindsay initiated a poetic renaissance in the Midwest, with Chicago as its center.

John Hollander (1929–2013) was an acclaimed American poet and the Sterling Professor emeritus of English at Yale University. His books include Spectral Emanations: New and Selected Poems, Harp Lake, In Time and Place, and Blue Wine and Other Poems. Hollander was also the author of a number of critical works, including Rhyme’s Reason: A Guide to English Verse.

Ronald Primeau is Professor of English and Director of the MA in Humanities at Central Michigan University. He has published books on Edgar Lee Masters, Herbert W. Martin, the literature of the American highway, and the rhetoric of television. He has edited works on Masters, Paul Laurence Dunbar, and the dynamics of literary influence.

▼▲
I'm the author/artist and I want to review Spoon River Anthology - eBook.
Back
×
Back
×