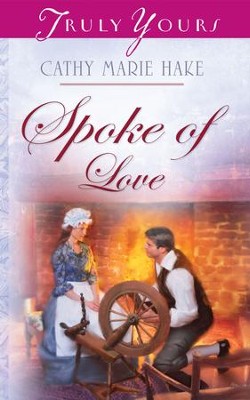 ▼▲
Garnet Wheelock is terrified and alone in a new land. After being sold as a mail-order bride to cover her dead husband's debts, she had to endure a treacherous ship voyage and a cruel master upon her arrival in Virginia. But when she is bought by Samuel Walsh, Garnet's luck changes. Samuel wants a woman's touch on his home and family, and one look at Garnet told him that she was just the woman to give it. Garnet fits into his family with ease, but can a master and servant's feelings run to something other than affection and appreciation? Cathy Marie Hake, softcover, 170 pages.

Cathy Marie Hake is a Southern California native. She met her two loves at church: Jesus and her husband, Christopher. An RN, she loved working in oncology as well as teaching Lamaze. Health issues forced her to retire, but God opened new possibilities with writing. Since their children have moved out and are married, Cathy and Chris dote on dogs they rescue from a local shelter. A sentimental pack rat, Cathy enjoys scrapbooking and collecting antiques. "I’m easily distracted during prayer, so I devote certain tasks and chores to specific requests or persons so I can keep faithful in my prayer life." Since her first book in 2000, she’s been on multiple best-seller and readers’ favorite lists.

▼▲
I'm the author/artist and I want to review Spoke Of Love - eBook.
Back
Back