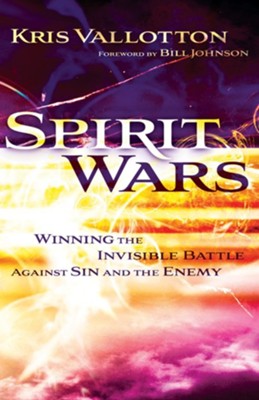 Spirit Wars: Winning the Invisible Battle Against Sin and the Enemy - eBook

▼▲
You know the battle is raging--but are you fighting the right enemy?

Just as enemies fought Joshua in the Promised Land, and Nehemiah faced opposition as he rebuilt the walls of Jerusalem, our enemy will fight us as we approach the spiritual terrain God has promised us. Most Christians retreat at the first sign of conflict because they fail to recognize the true nature of the battle. But you can prevail in freedom and joy.

Sharing his deeply personal story of demonic bondage, torment and ultimate deliverance, pastor and bestselling author Kris Vallotton turns the idea of spiritual warfare as we know it on its head. He reveals the diabolical lies and strategies of the enemy--attacks and traps so subtle and deceptive that we may find our souls and hearts imprisoned without even knowing it.

No more! Now you can win the invisible battle against sin and the enemy. Victory is within your grasp. Will you take hold?

"It is with great excitement that I recommend this book to you, knowing that fruit will increase until Jesus gets His full reward."--Bill Johnson, author, When Heaven Invades Earth and The Essential Guide to Healing, senior pastor, Bethel Church, Redding, California

▼▲
Kris Vallotton is the senior associate leader at Bethel Church in Redding, California, where he has served with Bill Johnson for three decades. He has written several books, including the bestselling The Supernatural Ways of Royalty and Heavy Rain. His prophetic insight and humorous delivery make him a much-sought-after international conference speaker, and his personal testimony of deliverance from fear and torment brings hope and freedom to thousands. Kris is also the cofounder and senior overseer of the Bethel School of Supernatural Ministry, which has grown to more than 1,300 full-time students, as well as the founder of Moral Revolution, an organization dedicated to cultural transformation. He has appeared on numerous media outlets, including The 700 Club. Kris and his wife, Kathy, live in Redding, California.

▼▲
I'm the author/artist and I want to review Spirit Wars: Winning the Invisible Battle Against Sin and the Enemy - eBook.
Back
×
Back
×