Skip to main content
Get Christmas Ready Sale: Deals on over 1,150 titles thru 9/27.
Spirit of the War Horse; Kitty Silverwings, an Appaloosa Story
By: Patti Ansuini
Stock No: WW711850 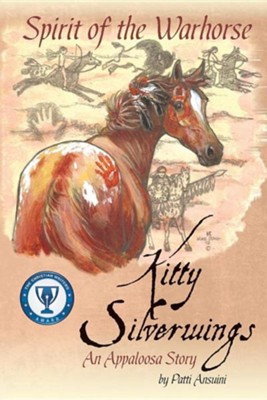 Spirit of the War Horse; Kitty Silverwings, an Appaloosa Story

▼▲
In telling the story of Kitty Silverwings, Patti Ansuini shares a compelling example of the spiritual bond that can form between humans and horses. Although often hard to explain, the connection is clearly understood through the emotional saga of Kitty and the challenges she faced. Countless horse owners will tell of special moments of understanding, but Ansuini gets deeper and leaves the reader believing in the authenticity of spirits from the past and the power of prayer to whatever form of divinity it is that watches over our animals. Kitty happens to be an Appaloosa, so that makes for an intriguing tale beyond what it would be if she were 'just a horse.'

Tell us a little about yourself.  I've been a freelance writer, reporter for the past twenty plus years. My interest, make that my passion, has always been horses. The subject of most of my work were the championship seasons of some of best that the horse world had ever produced. Then in 1993, I was blessed with the arrival of a very special filly. Kitty Silverwings, was born with multiple catastrophic injuries that each according to the vets, were life threatening. Immediate Euthanasia was recommended. When I walked back into Kitty's stall to bid her a tearful farewell she gazed up into my eyes and I saw the undeniable hope of life. I returned to the vet who had been waiting for my answer just outside the stall door. I told him I had changed my mind, I was going to give her a chance at life. I quit my job and spent the next three months living in the barn and helping Kitty overcome her balance problem. So began a string of joyous, miraculous adventures.

What was your motivation behind this project?  The miracles have been virtually endless when it comes to telling Kitty's story. Not the least of which is the fact that beginning at twelve hours old I began video taping Kitty and did so until she was nearly four years old. Without this taped 'proof' the veterinary experts would not have believed this story with the single exception being our hometown vets. One day I decided I needed to sit down and edit the hours of video tape I'd amassed. I was able to cut it down to just over thirty minutes and set it all to music, had a video production company put in title screens and then mailed the resultant copies to the 39 veterinary colleges in the U.S. and Canada. The response was tremendous. My original intent was to save babies who I felt weren't being given much of a chance to overcome what the simplest of defects.

What do you hope folks will gain from this project?  Kitty is a divine miracle! We aren't just talking about one instance. There are more than you can count in the book alone! It continues to this day. Never give up, not ever! Absolute love conquers absolutely. (1 Corinthians, 13:13)

How were you personally impacted by working on this project?  In 2006 I was diagnosed with stage 4 cancer that had metastasized throughout my lymph system. My family was given little hope for my survival. The radical surgery and care I received left one option, to be fed through a stomach tube. What was considered the routine procedure of inserting a gastric tube became another catastrophic blow to my already tenuous condition. I now had peritonitis! A lethal accident that had a high fatality rate mostly seen on battlefields. I was admitted to the hospital were I remained for the next three months. The doctors advised my family that my chances for survival had taken a turn for the worst and was given a less than 4% chance of survival. All the while the radiation continued daily for 7 weeks and the chemo was administered every 21 days. During this trying time my husband had taped a photo of Kitty and I, in the barn horsing around. Anytime I opened my eyes the first thing I would see was the photo of Kitty nuzzling my cheek. You could say that she had returned those precious three months to me.

Who are your influences, sources of inspiration or favorite authors / artists?  I believe absolutely that Jesus answered my prayers. He performed many miracles between Kitty and I, the proof is in our very survival. Many experts have written testament to this fact in the book itself.

Anything else you'd like readers / listeners to know:  Spirit of the Warhorse, Kitty Silverwings, An Appaloosa Story, is a true story based on true incidents and facts. If you never in believed in miracles, I think you will have a change of heart once you heard the tale.